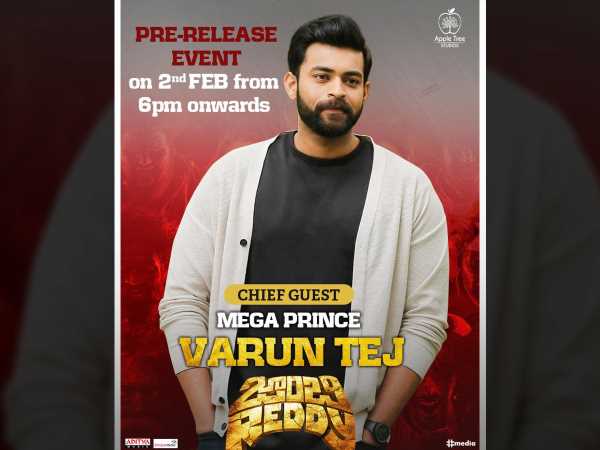 Varun Tej is currently working for his upcoming sport based movie  Ghani in  which he is playing the role of Boxer. Now according to the latest update, Varun  Tej is going to attend the pre release event of Zombie Reddy as a Chief which will take place on 2nd February.

The makers of Zombie Reddy have confirmed the same by releasing a new poster on the official handle of Twitter. Teja Sajja is playing the lead role in Zombie Reddy, which is directed by Prashanth Varma of Awe and Kalki fame.

Prashanth Varma’ directorial venture  Zombie Reddy  is all about how  the people of Kurnool save world by stopping the pandemic and the movie is based on the backdrop of Coronavirus.  Teja Sajja starrer film, which has  Anandhi and Daksha Nagarka as the leading ladies, has completed the censor formalities and finally after facing all the hurdles, it is gearing up for the grand release on 5th February.

On the other side, Varun Tej starrer Ghani has Kannada Superstar Upendra  and  Bollywood Star Suniel Shetty in the  crucial roles  and Saiee Manjrekar  is playing the love interest of  F2 Fun and Frustration  fame Varun Tej in this movie, which is being directed by Kiran Korrapati.