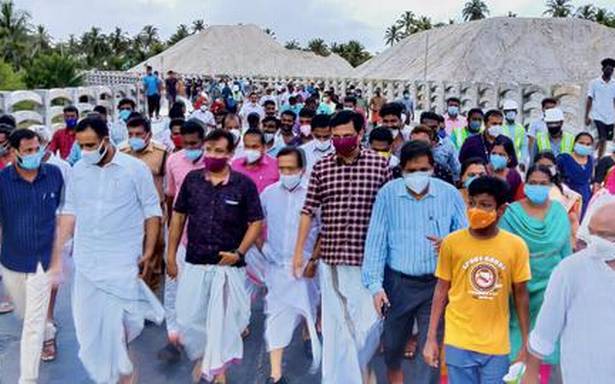 Running parallel to sea and Kayamkulam Kayal, it is being built at a cost of ₹146 crore

Valiazheekal bridge over Kayamkulam Kayal connecting Alappuzha and Kollam districts will be opened for traffic this year itself, Public Works Minister P.A. Mohamed Riyas has said.

Mr. Riyas on Sunday visited Valiazheekal and reviewed the progress of the project. He said the construction of the bridge, delayed due to the COVID-19 pandemic, was nearing completion.

“The opening of the bridge will be a major boost to the tourism sector and the government will take measures to tap its potential,” Mr. Riyas said.

The bridge connecting Arattupuzha grama panchayat in Alappuzha and Alappad in Kollam has been designed to attract tourists. Running parallel to sea and Kayamkulam Kayal, it offers a spectacular view of both the sea and lake from the middle. The bridge with 29 spans is being constructed at a cost of ₹146 crore. It has a length of 976 metres. The major attraction of the bridge is the three bowstring arches in the middle, which will allow hassle-free movement of big fishing boats. It is the longest bowstring arch in South Asia.

The bridge will link Azheekal and Valiazheekal fishing harbours. It will help reduce the distance between the two places by 28 kms along with putting them on the tourism map.

The work is being carried out by the Uralungal Labour Contract Cooperative Society.