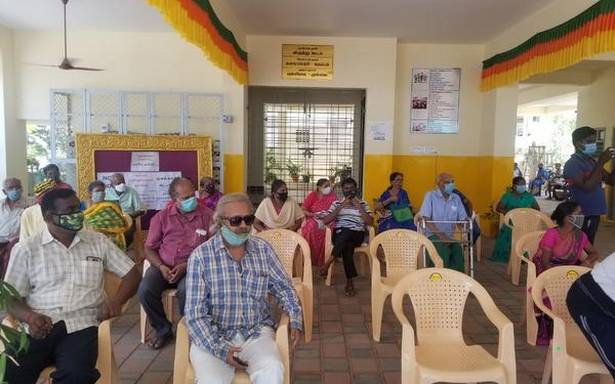 Kothari Nagar in Ramapuram has achieved 100 per cent vaccination with respect to the first dose for the age group of 45 and above. Kothari Nagar Residents Welfare Association is confident of achieving the same figure with the second dose as well.

Likewise, the Association has vaccinated domestic helpers, drivers, and watchmen, employed by the residents and vendors in the colony.

“Our colony has 80 people in the 45-plus age category. This was accomplished with repeated awareness programmes conducted online. The secretary of our association, M Arunachalam is a doctor. He played a key role in creating awareness,” says A Paul Dhas, association president.

Likewise, Kurunji Nagar in Ramapuram has also secured 100 per cent vaccination in the 45-plus age category, including the second dose.

“We conducted six camps in order to ensure physical distancing. Earlier, people were reluctant to take the shot. Later, with an increase in deaths, people volunteered themselves to get vaccinated,” says S Raja, secretary, Krunji Nagar Residents Welfare Association. KP Nagar and Rayala Nagar, two other colonies from Ramapuram have also achieved the same results.

“We organised a camp for the 18-plus age group, which got cancelled later due to the unavailability of the vaccine. Hence, we converted it into a fever camp,” says A Thirumurugan, secretary, KP Nagar Association. In Rayala Nagar, around 250 people in the 45-plus age group have been vaccinated.

“We wish to cover the younger population with the same speed once vaccination begins for the 18-plus category,” says PV Kishore, president, Rayala Nagar Welfare Association.