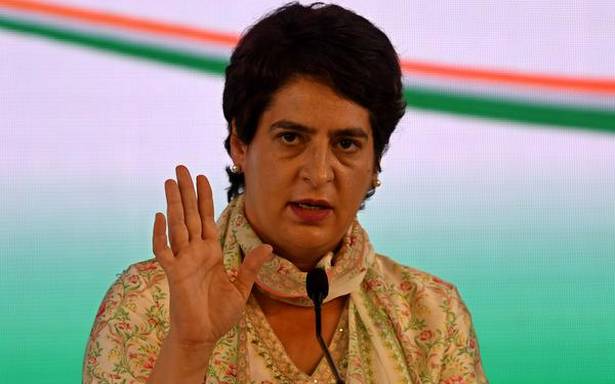 The Congress on February 9 promised to waive farm loans and provide 20 lakh jobs in its Uttar Pradesh election manifesto, which also promised to provide ₹3,000 as compensation to farmers for crop damage by stray cattle.

The manifesto was released a day before the start of the first phase of the Assembly polls in the State.

The BJP and the Samajwadi Party released their manifesto for the U.P. election on February 8.

Releasing the manifesto, Ms. Priyanka said, the Congress will waive loans of farmers, and also purchase wheat and paddy at ₹2,500 per quintal as well as sugarcane at the rate of ₹400 per quintal, after coming to power.

The issues of unemployment and inflation has been taken care while formulating the manifesto of the State, she said.

She said, “₹3,000 compensation will be given to farmers for crop damage by stray cattle. ‘Godhan Nyay Yojna’ will be started under which which cow dung will be purchased at ₹2 per kg,” she added.

Ms. Priyanka said the Congress wanted to end outsourcing in the government, and will regularise those who are on contract or are being outsourced in phased manner.