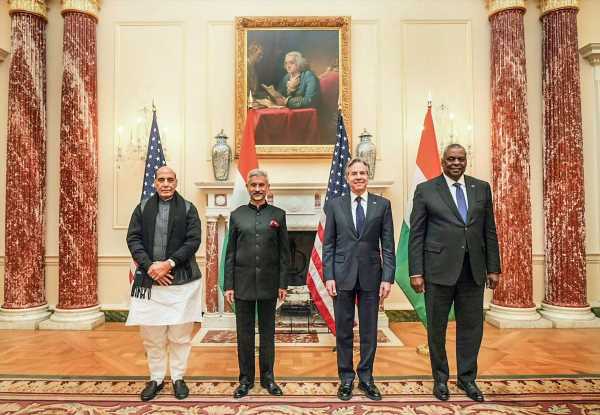 The pressure on India to take a hostile attitude towards Russia and China was not subtle, but it was guarded, observes Ambassador T P Sreenivasan after Monday’s 2+2 ministerial meeting in Washington, DC.

The unprecedented attention that India received on account of the Russia-Ukraine war was flattering to India as it appeared that Indian neutrality had become a case study for other countries in balancing the US and Russia.

But it emerges that the idea of many of the visits and conversations was also to push India in one direction or another because we seemed flexible.

India’s consistent position of abstention beginning with the first United Nations Security Council resolution to the UN General Assembly resolution to suspend Russia was seen by many as a balancing act, which could topple one way or another.

The condemnation of the Bucha massacre by the Russians was seen as evidence of the pressure working on India.

The US, which had expected India to abstain in the Security Council, considered the Indian position ‘shaky’, but when it found that certain Indian actions like the purchase of Russian oil and development of innovative financial arrangements for trade, the US decided to pursue a carrot and stick policy to wean India away from its tilt towards Russia.

Some of the US statements in this connection were counterproductive, particularly when an official pointed to the possibility of sanctions against India and another suggested that India should move away from its ‘NAM and G77’ relationship with Russia.

The opportunity of the 2+2 meeting in Washington was taken by the US not only to raise these issues, but also to seek a virtual meeting between President Biden and Prime Minister Modi to review India-US relations in the light of these developments even while the war was still raging.

The White House stated that President Biden held a ‘constructive, direct conversation’ with Prime Minister Narendra Modi, as the US is seeking more help from India to apply economic pressure on Russia over the war in Ukraine.

It also said that President Biden told Prime Minister Modi that his administration could help India diversify its oil imports, but that it was not in New Delhi’s interests to increase energy imports from Moscow.

The US did not want to see a significant increase in Russian energy imports by India.

‘The President conveyed that we are here to help them diversify their means of importing oil.

‘The imports from the United States are already significant, much bigger than the imports that they get from Russia.

‘The President conveyed very clearly that it is not in their interests to increase that.”

The US virtually laid out some benchmarks relating to Russia to enable the US to have a productive relationship with the US.

The new dimension introduced by the US was not acceptable to India as it was something that had not happened even during the Cold War. 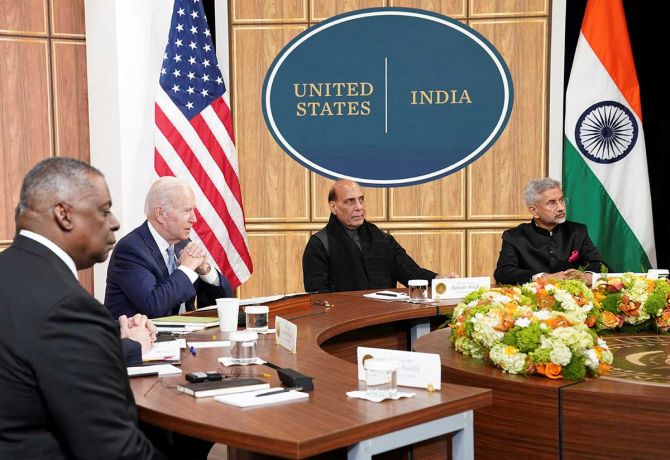 India focussed at the summit as well as the 2+2 talks more on the concerns over the continuing Russia-Ukraine war and the need to resolve issues through peaceful negotiations and stressed that Prime Minister Modi had spoken to both President Putin and President Zelensky several times and urged them to return to the negotiating table.

As for import of Russian oil, which was important for India’s energy security, it was pointed out that Western Europe had imported more Russian oil ‘one afternoon’ than what India imported in a whole month since the beginning of the war.

India believed that it had a stabilising role in the global economy and this applied to both fuel and food.

Prime Minister Modi recalled that India had condemned the killings in the Ukrainian city of Bucha, where the discovery of hundreds of civilian bodies following a Russian withdrawal from the town sparked international outrage, and called for an independent investigation.

President Biden emphasised the defence partnership between the two countries and said that the US and India are going to ‘continue our close consultation on how to manage the destabilising effects of this Russian war’.

‘The root of our partnership is a deep connection between our people, ties of family, of friendship and of shared values,’ he said, hinting that the Ukraine war had become a source of tension in recent weeks.

The fact that the other members of the Quad, which was a bulwark against China had not only supported the US, but also imposed sanctions against Russia was a factor he had in mind when he spoke of defence cooperation.

The hint was clear that the Quad had imposed a certain obligation on the member countries to work together in defence matters.

Although defence cooperation between India and Russia is a matter of legacy, which was recognised by the US, it may also emerge as another benchmark for establishing a stable defence partnership between the US and India.

The threat of CATSAA over the supply of S-400 missiles is still in the distant horizon.

US Deputy National Security Adviser for International Economics Daleep Singh, who visited India recently had said the US will not set any ‘red line’ for India on its energy imports from Russia but does not want to see a ‘rapid acceleration’ in purchases.

Though it was clarified that this was not a threat of sanctions, only a wish expressed that India should be on the right side of history.

‘But this was a constructive call, it was a productive call.

‘It’s a relationship that is vitally important to the United States and to the President.

‘I would not see it as an adversarial call,’ the White House spokesperson said.

The summit discussions and the 2+2 dialogue were in the spirit of greater cooperation between India and the United States as members of the Quad, which should not be disturbed by the Indian position on the war.

The pressure on India to take a hostile attitude towards Russia and China was not subtle, but it was guarded.

Those who are familiar with the roller coaster ride nature of India-US relations will not miss the danger lurking in the present situation.

Secretary of State Blinken said rather bluntly that the US was monitoring human rights abuses in India by the government and some officials, revealing a traditional weapon in the US armoury.

India has successfully withstood the pressure so far, but there is many a slip between the cup and the lip.

Ambassador T P Sreenivasan, Indian Foreign Service 1967, served as a diplomat both in Moscow and Washington, DC. A long time Rediff.com columnist, you can read his earlier columns here.