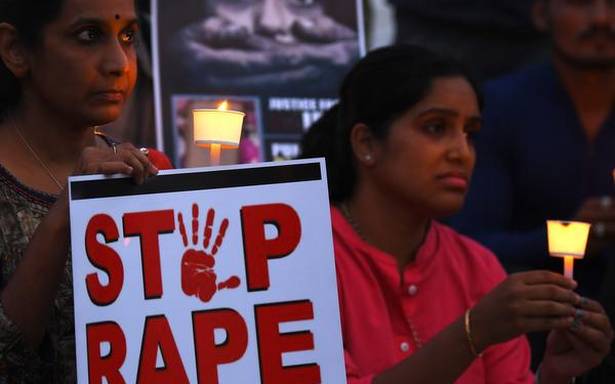 The family named three persons as accused in connection with the incident.

The body of a minor girl, who was allegedly gang-raped and then killed, was recovered from near railway tracks in the Gandhi Park area here, police said on Tuesday.

They said efforts are on to nab three persons accused of the crime.

According to police, the girl student, aged 15-16 years, had gone missing from her house in a village under the Harduaganj police station area on Sunday morning.

Shortly after her family received a message that she has been kidnapped and demanded ₹ 5 lakh as ransom for her release, they added.

The kidnappers warned that if the money was not paid, a video showing the victim in a compromising position would be posted on social media, police said.

According to the complaint filed by the girl’s family at Gandhi Park police station on Monday, they were unable to raise the money and were desperately trying to search for her when they were asked by police to identify a dead body of a girl which was found several kilometres away from their village along the railway tracks.

Police said they are examining a “suicide note” that was recovered from the site where the victim’s body was found.

Superintendent of Police (city) Kuldip Singh told reporters that on Monday night the family named three persons as accused in connection with the incident.

The three have been booked for murder and under the Protection of Children from Sexual Offences (POCSO) Act, he added.

Police said a thorough investigation is underway and the perpetrators would not be spared.

The body has been sent for post-mortem, they said.