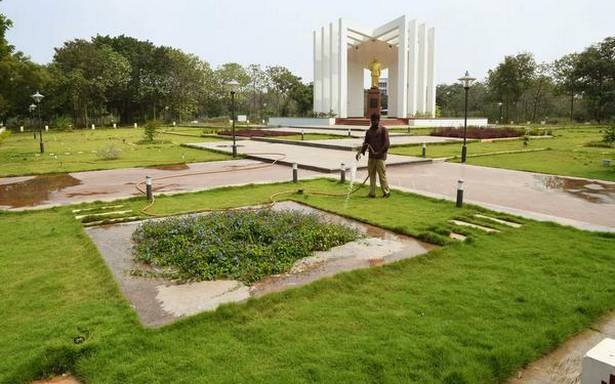 Delay on the part of Higher Education Ministry in providing substantial funding could cause a crisis situation for Bharathidasan University, as it is confronted with the situation of paying pending salaries for over 600 guest lecturers and 90 non-teaching staff of the erstwhile constituent colleges, senior professors say.

The university has not paid the guest lecturers for four months, from the start of this financial year. The government had earlier given a commitment to meet the salary expenditure of the guest lecturers after the conversion of the 10 constituent units into Government Arts and Science Colleges.

The guest lecturers who are already being paid meagre amounts as salaries have been left in a limbo, and have been urging the university to settle their dues. Going by a government order issued at the start of this year, the guest lecturers need to be paid a monthly salary of ₹ 20,000.

According to the senior professors, the funding by the State government has dried up in toto, but for the quarterly block grants. “Even the fee collected from students in the erstwhile constituent colleges now go to the government. The university is required to set apart close to ₹80 lakh per month towards salary expenditure for the guest lecturers. But, the revenue is abysmally low, and the only source of funding is the affiliation fee and research grants. The situation is really grim,” a senior professor said.

Of the ₹5,369.09 crore Budget Estimate for 2021-22 for higher education, ₹767.98 crore has been earmarked for universities. However, there is no mention of any specific funding for Bharathidasan University. “The government must treat Bharathidasan University as a special case since it has the highest number of 10 out of the 41 constituent units of State varsities,” said a senior non-teaching employee. There are as many as 2,60,234 students pursuing their studies in 159 affiliated colleges.

“We will shortly be meeting higher education authorities to apprise them of the financial situation of the university and make a fervent request for settlement of the salary dues for guest lecturer,” University Registrar Gopinath Ganapathy said

Meanwhile, Bharathidasan University Retired Staff Welfare Association has written to the Governor Banwarilal Purohit urging his intervention in preventing the university from transferring money from the Corpus Fund to the General Fund. The Corpus Fund was created for settlement of retirement benefits, said its secretary T. Punniamoorthy, .

At its Executive Committee meeting earlier this year, the association had sought renaming of the nomenclature as Pensioners Corpus Fund.