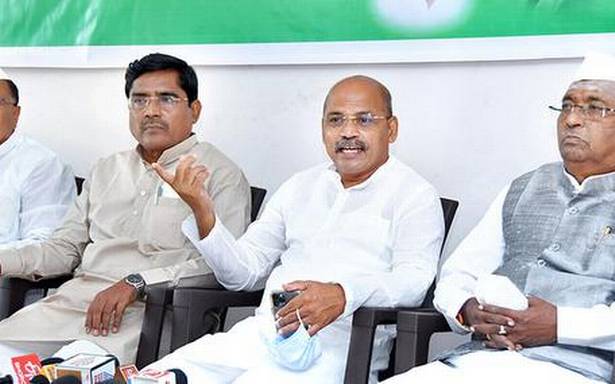 Expressing their active support to Bharat Bandh called by farmers’ organisations demanding the repeal of three ‘anti-farmer’ laws enacted by the Union government, Congress party leaders Sharan Prakash Patil, B.R. Patil, M.Y. Patil and Jagdev Guttedar said that their party activists would participate in the planned agitation on Monday by taking out a massive bike rally in Kalaburagi.

Addressing a media conference at the local party office here on Sunday, they said the rally would start from their party office at 9 a.m. and pass through SVP Circle, Bus Stand, Supermarket, Sedam Road, Aland Road, Nehru Gunj, Jewargi Road and other major streets across the city.

“Farmers had not demanded the amendments to APMC, contract farming and Essential Commodities Acts. No Parliamentarian has demanded them in the Parliament. Yet, the BJP government unilaterally imposed them on the farming community despite the latter’s stiff resistance. Thousands of farmers have been on an indefinite agitation on the Delhi border for the last several months opposing these anti-farmer laws and the Modi government is going to implement the laws to serve their corporate masters and satisfy its ego. BJP is acting like a slave of big corporate companies scarifying the interests of farmers. If the farm sector collapses, the entire nation will collapse. The enactment and the implementation of the laws against the wishes of farmers is an injustice not just to farmers, but to 130 crore Indians. The Union government should stop serving as an agent to corporate giants like Ambani and Adani and come forward to safeguard the interests of common people,” Mr. B.R. Patil said.

Referring to the BJP’s promises made in the manifesto during the last Lok Sabha elections, Mr. Sharan Prakash Patil said that the BJP did not implement the M.S. Swaminathan panel as promised to lift the farmers from the crisis but did take measures that would deepen the farm crisis and farmers’ woes just to help corporate companies in the farm sector. “The BJP government betrayed the farmers by not keeping its poll promise of implementing the M.S. Swaminathan report. It introduced the Pradhan Mantri Fasal Bima Yojana claiming that the insurance programme would protect the farmers from crop loss. But, in reality, it is a programme that was introduced to cheat the farmers and allow insurance companies to make fortunes,” he said.