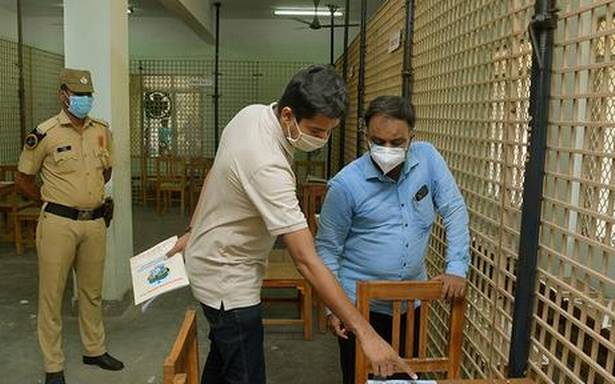 The process will take place in 31 halls at six centres

After a nearly month-long wait since Puducherry voted under President’s rule on April 6, the spotlight has zoomed in on a sprawling campus in the city where the votes will be counted amid tight security on Sunday.

The process will involve accounting for an estimated 8.20 lakh votes polled across 30 Assembly constituencies after the Union Territory, with 10.04 lakh voters, registered a turnout of 81.69%. The battle for the 30-seat House (which also has three nominated members) is essentially between the Congress-led alliance comprising the DMK, the Left parties and the VCK, and the NDA consisting of the AINRC, the BJP, the AIADMK and the PMK. The 324 candidates in the fray include nominees of the AMMK, the NTK and the MNM and Independents.

The counting will take place in 31 halls spread across the six centres in the Union Territory. The three centres for all 23 constituencies in the Puducherry region will be on a campus at Lawspet — the Women’s Polytechnic, Mothilal Nehru Government Polytechnic and the Tagore Arts College. In the regional enclaves, there is one centre each for Karaikal (5 constituencies) and the sole constituencies of Mahe and Yanam.

However, unlike in the past, the full results are likely to be available late at night as the Elections Department is carrying out the process in a staggered manner to comply with the COVID-19 safety directives of the Madras High Court and the Election Commission.

The reduction of the counting tables from seven to five, ventilated halls, separate entry passages for polling officials and candidates and their agents, on-the-spot RAT facility and the availability of masks, face shields, PPE kits and biowaste bins are among the safety measures in place. Anyone entering the premises needs to produce RT-PCR/RAT-negative certificate or the two-dose vaccination certificate.

“The counting will commence at 8 a.m. with the tabulation of postal votes. The votes polled in the EVMs will be counted from 8.30 a.m.,” said T. Sudhakar, Nodal Officer (Counting).

At the counting venue in Puducherry, over 1,000 polling staff and a 400-strong police force have been deployed. There are five tables each in 23 counting halls, with three officials at each table.

The seating arrangement is such that one agent in PPE kit will be positioned between two counting agents. Additional AROs have been deployed for the counting of the postal ballots. A dedicated medical team with ambulance has been stationed at all centres.

After completion of the EVM counting, the mandatory counting of the printed paper slips of five randomly selected VVPATs to cross-verify with the EVM count will be taken up, Chief Electoral Officer Shurbir Singh said.