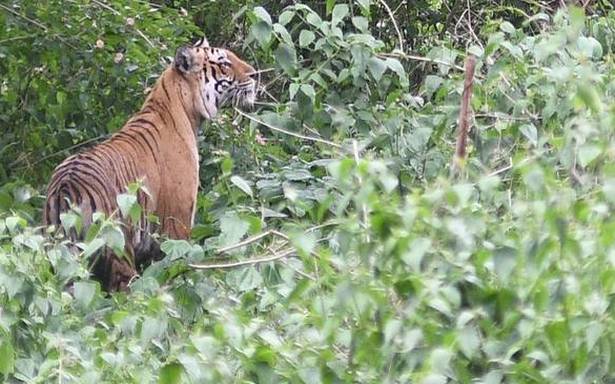 Anamalai Tiger Reserve located at Pollachi near Coimbatore, one of the largest landscapes in the south of Palghat Gap with 4000 sq km of protected area, and the Mudumalai Tiger Reserve in the Nilgiris, a bio-diversity hotspot of the Western Ghats have now earned a global elite tag in tiger conservation. It is the Conservation Assured Tiger Standards (CATS) status, a conservation tool for best practices and standards to manage tigers. Only 14 reserves made the cut including Parambikulam in Kerala, Bandipur in Karnataka, and Manas, Kaziranga and Orang in Assam, for the accreditation exercise by India’s National Tiger Conservation Authority under CATS. Well-known reserves like Corbett, Ranthambore and Bandhavgarh did not get the tag.

Says I Anwardeen, Additional Principal Chief Conservator of Forests (APCCF) Coimbatore circle, now posted as APCCF Working Plan, Chennai, “It’s an exercise that helps us improve and ensures that we we don’t fall behind in any parameters defined by tiger conservation experts. The performance of the institution has been assessed based on certain indicators. We have been doing well because of a concerted, holistic, conservation-centric activity continued over the years.”

While there was a time when over 50,000 tigers roamed the forests across the country, as per the latest tiger census, India now has 2,967 which is 70 per cent of entire world’s tiger population. Anamalai is home to 20 tigers, and at Mudumalai the number is 103.

The Anamalai Tiger Reserve (ATR) houses six indigenous tribal populations, an anthropological reserve that tells you the history of conservation involving the tribals, says E Prasanth, Assistant Conservator of Forests, ATR. Tourism here is restricted to just two per cent of the protected areas, though officially six percent is allowed. “Barring visits to Kozhikamuthi Elephant Camp in Top Slip, there are no safaris and hence minimal human interference and vehicle movement. The tag is an international recognition. It has been possible with the help of supportive and dedicated field staff (about 60 per cent of them are from tribal communities) who know the land, take ownership and protect it.”

At Mudumalai Tiger Reserve (MTR), the highlight is a culture of good relations with all stake holders including the tribals, judiciary, district administration, and the NGOs. “There has been no organised poaching in the last 10 years. We are a naturally endowed bio-diversity hotspot that has been protected very well. We have a good prey population of spotted deers and gaurs,” says K K Kaushal, field director of MTR.

Mudumalai has stable population of tigers in the buffer zones too, says K Vijaykumar, senior project officer with WWF in the Nilgiris. He has has been involved in tiger census and tiger monitoring at reserves in Mudumalai, Satyamangalam, Parambikulam, Wayand, Kalakkad- Mundanthurai, and the Niligiris and Coimbatore forest divisions. “ I have seen tigers over 50 to 60 times, sometimes near a stream, or playing with cubs, or taking a nap. Now, we see tiger cubs are moving towards forests in Coimbatore, Wayanad, Nagarhole and Bandipur. Every male marks a territory, a home range 10 to 20 km depending on the prey population. If another male attempts to trespass, it’s a battlefield.” Explaining the CATS parameters, Prasanth says, “Everything counts. Besides areas like legal status of the land, communities in the neighbourhood, and man-animal conflicts, the rating also looks at how we fare in habitat management, scientific tiger census, security plan, and anti-poaching wing.”

The ATR, he says, also makes a positive impact on the communities. For example, the Parambikulam-Aliyar water project and the Amaravathi river serves as a lifeline for farmers in the district. “An excellent anti-poaching mechanism protects prey population and the predator thrives. We scored well in protection, management, stakeholder engagement, habitat development, and HRD and this was possible because of continuous efforts of officers. It’s a recognition of the ethos of the department. People have toiled day and night to come up with protocols and conservation mechanisms,” explains Anwardeen.

Recalling his rendezvous with tigers, Anwardeen says it started in 2006 at Kalakkad- Mundanthurai Reserve where he was a part of a capture operation to trap a wild tiger. “ I have been lucky to spot one wherever I go. I also led two man-eater tiger hunting operation in Gudalur. Tigers are our mascots, our ambassadors who maintain ecological integrity (a pristine ecosystem with minimal human intervention) of wonderful landscapes. Tigers thrive where human imprint is minimal. When you protect tigers, wildlife flourishes.”

“You can just marvel at it forever,” Anwardeen adds. “For its sheer hunting skills, the power of its canine, the paws, its social life… it’s a long list. Culturally, tigers have been a part of Tamil folklore even in Sangam Ilakkiyam.”

Nothing can beat the happiness of spotting a tiger in the wild, says Kaushal. “We just want to keep seeing it again, and again, again…”