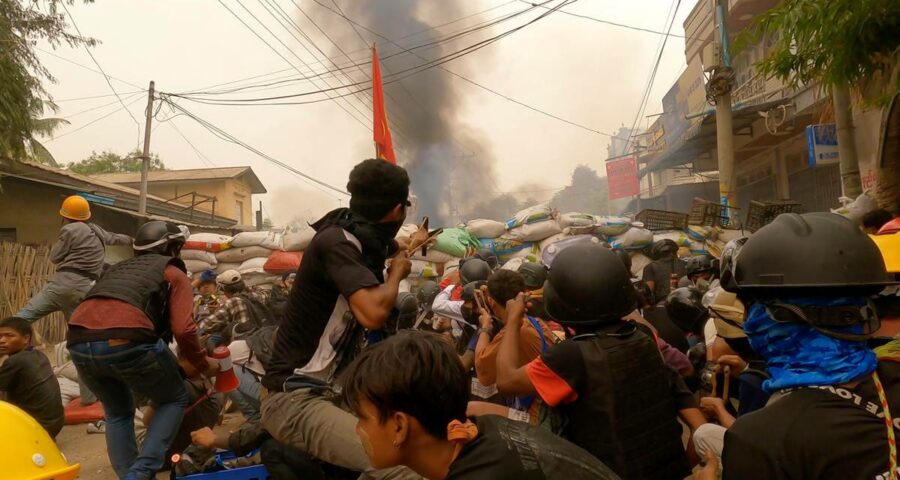 INDIA WAS among eight nations that attended an annual military parade in Myanmar’s capital Naypitaw on March 27 — nearly two months after the military staged a coup to depose the Aung San Suu Kyi government and launched a deadly crackdown against protesters demanding the return of democratic rule.

A senior official in South Block told The Indian Express that “since diplomatic relations between both the countries continue, diplomatic commitments are also continuing”.

The Myanmar military’s crackdown, including firing at protesters and using tear gas, is estimated to have led to nearly 500 deaths and drawn condemnation from across the world. It has also led to a refugee influx into neighbouring Mizoram, mostly by policemen who have fled the crackdown.

The annual parade took place a day after the military chiefs of nearly a dozen nations condemned the excessive use of force by the Myanmarese military against the protesters. In a statement issued Friday, General Mark A Milley, the chairman of the US Joint Chiefs of Staff, joined fellow chiefs in condemning the use of lethal force against protesters.

The statement said that Milley joined “chiefs of defence from Australia, Canada, Germany, Greece, Italy, Japan, the Kingdom of Denmark, the Kingdom of the Netherlands, New Zealand, the Republic of Korea and the United Kingdom in calling on the military junta in Burma — also called Myanmar — to follow international standards of military professionalism”.

It said that as “Chiefs of Defence, we condemn the use of lethal force against unarmed people by the Myanmar Armed Forces and associated security services,” and that “a professional military follows international standards for conduct and is responsible for protecting — not harming — the people it serves”.

It urged the Tatmadaw, the armed forces of Myanmar, “to cease violence and work to restore respect and credibility with the people of Myanmar that it has lost through its actions” and said that the statement “follows concerns voiced by other countries in the region…”

Since its initial statement soon after the coup, India has maintained silence on the issue. On February 1, the External Affairs Ministry had stated: “We have noted the developments in Myanmar with deep concern. India has always been steadfast in its support to the process of democratic transition in Myanmar. We believe that the rule of law and the democratic process must be upheld. We are monitoring the situation closely.”

Since then, even as the Mizoram government had issued a directive to assist refugees fleeing Myanmar, the Union Government has informed bordering states and the Assam Rifles to block the inflow of Myanmar nationals, and deport the ones who had come in.

India has traditionally enjoyed a close relationship with the regimes in power in Myanmar, especially the military. In October 2020, Army Chief General M M Naravane and Foreign Secretary Harsh Shringla had visited the country to enhance bilateral ties. They had met the country’s then state counsellor, Aung San Suu Kyi, and the military leadership.

India had also handed over a submarine to Myanmar, which was officially inducted in December.

Speaking at a seminar in February, the Army Chief had spoken about the proximity of the militaries of the two countries. He had stated that “while relentless operations by the security forces and proactive government policies have laid the foundation, favourable external environment with Myanmar and Bangladesh has struck at the roots of insurgent organisations”.

Naravane had also said that a “series of operations under Operation Sunrise with Myanmar Army has witnessed growing cooperation and synergy between the soldiers on ground with reasonable operational dividends”.