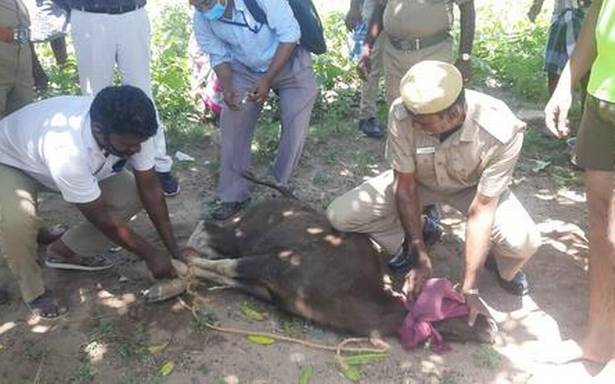 Two gaur calves – one male and another female – which accidentally fell into an open well at Kannuthu village falling under the Thuvarankurichi Forest Range in the district were rescued by teams of fire fighters and Forest Department personnel on Wednesday.

The two animals had fallen into the well on Monday night and on Tuesday the information was relayed to the Forest Department officials and attempts to rescue the animals were carried out. The operation resumed on Wednesday morning jointly by the fire fighters and forest department officials.

The well had about five feet of water inside which was pumped out to carry out the rescue operation. The two animals were rescued one after the other from the nearly 60-feet deep well. A veterinarian examined the health condition of the rescued calves and found them to be stable. Following this, the two calves were released into the Kannuthu reserve forest, said a Forest Department official.