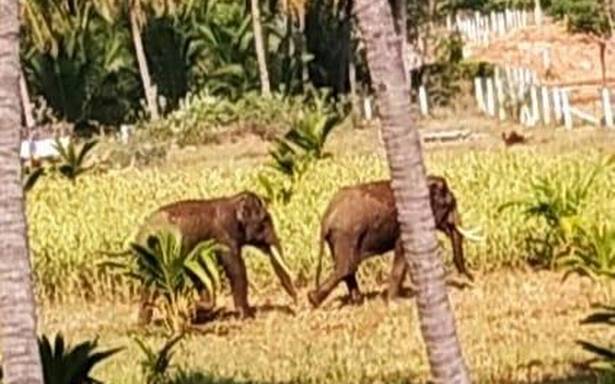 A team of staff from Sirumugai forest range spotted the tuskers at Pommalapalayam village at around 6 a.m. on Friday.

Two male elephants strayed into a village near Annur in Coimbatore district and attacked two cows on Friday morning, causing panic among the residents.

According to officials from the Forest Department, a team of staff from Sirumugai forest range spotted the tuskers at Pommalapalayam village at around 6 a.m. on Friday. These two elephants were already spotted on Thursday night and were sent back to Pethikuttai reserve forest, but had ventured outside again on Friday, the officials said.

No persons were injured due to the elephants, according to the officials. A total of three teams from Sirumugai, Mettupalayam and Periyanaickenpalayam forest ranges rushed to the spot and managed to drive off the elephants away from the village. Efforts were on to drive the elephants back into the Pethikuttai reserve forest and the teams would monitor the elephants till then, the officials said.