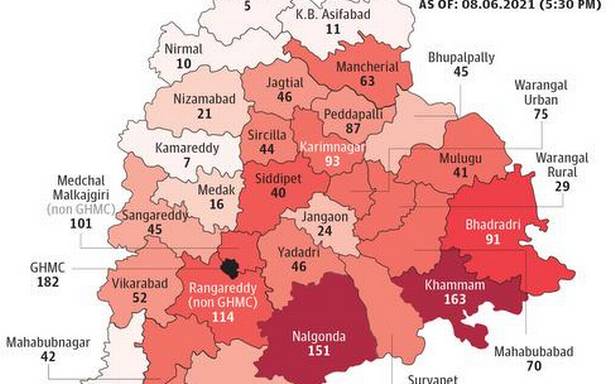 With 15 more deaths reported due to the infection on Tuesday, the toll in the State has reached 3,409. The cumulative total of positive cases has reached 5,95,000 and the total recoveries have gone up to 5,67,285 with another 2,982 infected persons being declared recovered.

According to a bulletin issued by the public health department, 93.44% (1,24,403) of the screening tests were done in the government facilities and the remaining 8,731 tests in private labs. However, reports of another 1,480 samples were awaited.

Active cases remained at 24,306 as of Tuesday evening including 11,297 undergoing treatment in hospitals.

Meanwhile, the active micro containment zone further went up to 275 on Tuesday. Based on the active cases in a particular locality, a highest of 87 active zones existed in Nalgonda district followed by 66 in Mahabubabad, 17 in Jagtial, 12 in Karimnagar, 11 each in Siddipet and Yadadri-Bhuvanagiri and 10 each in Jogulamba-Gadwal and Warangal Rural districts.

In another 10 districts, the active micro containment zones were in single-digit numbers.