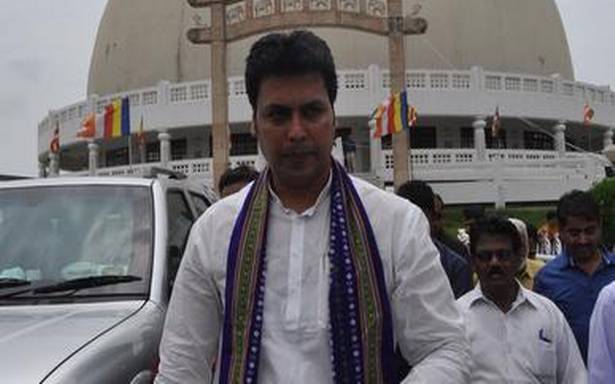 “I have directed the police to arrest culprits irrespective of their political affiliations to restore peace and tranquility,” the Chief Minister told PTI.

Tripura Chief Minister Biplab Kumar Deb on Wednesday directed the police to contain post-poll violence in the tribal council areas of the State.

“I have been worried after receiving news about incidents of post-poll violence in the tribal council areas after election results were announced on April 10.

“I have directed the police to arrest culprits irrespective of their political affiliations to restore peace and tranquility,” the Chief Minister told PTI.

The TIPRA has won 18 of the 28 seats in which polls were held. The remaining two seats are nominated by the Governor as per the State government’s advice. The ruling BJP came a distant second bagging only nine seats.

BJP spokesperson Nabendu Bhattacharya alleged that at least 10 party members were injured and many others hospitalised after coming under attack from TIPRA activists, who ransacked homes and businesses of the saffron party supporters and vandalised party offices.

The Chief Minister said that the administration has made an assessment of the damages to the properties in the violence and will compensate the owners.

“We cannot allow anyone to take the law into their hands. Culprits belonging to any party will be punished for their misdeeds,” Mr. Deb, who also holds the Home portfolio, said.

He appealed to the people to maintain peace and prevent attempts made to breach the peace.

“Violence should not continue in a civilised society and all law-abiding persons should firmly stand against it,” he said.

They visited vandalised party offices and listened to the people who complained that their properties were attacked and damaged, money looted and they were forced to flee their homes, he said.

Director General of Police V. S. Yadav said that steps are being taken to restore peace in the areas.

“We have registered suo motu cases and also received some complaints. Some people were arrested and a special team comprising CRPF and TSR (Tripura State Rifles) jawans deployed to prevent further untoward incidents. Section 144 CrPC has been imposed wherever it was needed,” he told reporters.

Deb Barman has urged his supporters to maintain peace amid celebrations after sweeping the tribal council elections.

“We have to maintain unity. I appeal to the people to refrain from attacking the party offices and houses of the supporters of IPFT, BJP, CPI(M) and Congress.

“They too are our people and we do not want to fight among ourselves. If we want unity, then we must maintain peace. They too will join our party after the polls,” he had said immediately after the election results were announced.

The TIPRA chief had on Monday announced that he would not tolerate violence or extortion in his name and stated that his party will not hold victory rallies.

State BJP chief Dr. Manik Saha has written a letter to the DGP urging him to ensure law and order.

“BJP Tripura Pradesh urges you to arrange for effective enforcement of law and order for peace, tranquility including communal harmony in the society and strict action may kindly be taken as per law in force,” it said.

Prohibitory orders were imposed in parts of the State for 24 hours from Saturday evening following reports of sporadic violence.