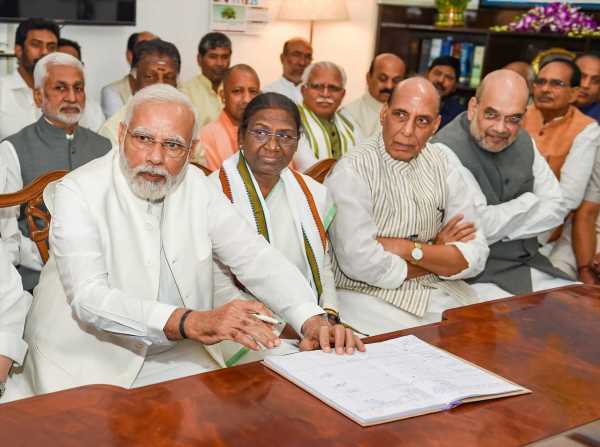 ‘It will be wrong to raise the expectations of tribals because of a tribal President.’
‘Tribal issues have not been resolved for 150 years.’

“Mrs Droupadi Murmu is very enlightened. She speaks with logic and firmly. She has done work and there are no false claims about her,” says Professor Ganesh N Devy, a leading expert on India’s indigenous tribes and founder of the Adivasi Academy.

“As an individual, I respect her and her integrity, but it is the political ecosystem in which a public official function that matters more than personal integrity today,’ Professor Devy, a writer, thinker and chairman of the People’s Linguistic Survey of India, tells Rediff.com‘s Archana Masih in the concluding part of the interview.

Are tribal politicians more occupied with nurturing their constituencies and staying in step with the powers that be, rather than improving, if nothing else, how tribal communities live without compromising their established way of life?

There are numerous good and hardworking tribal politicians who understand politics and the issues of the tribal people. But as I mentioned earlier, their position within the party structure gets minimised by their inability to draw funds.

Having wisdom is not enough, unless tribal politicians have the power to articulate that wisdom to action.

The political will to carve out that future for tribals will remain missing as long as politics is driven by greed and money.

In the hierarchy of money power, the tribals are at the tail end.

Have you met Mrs Droupadi Murmu?

I met her six-seven years ago at a function in Jharkhand where we were both chief guests.

I found her very enlightened. She speaks with logic and firmly. She has done work and there are no false claims about her.

As an individual, I respect her and her integrity, but it is the political ecosystem in which a public official function that matters more than personal integrity today.

There are Supreme Court judges with high personal integrity, but their integrity has been reduced in the present ecosystem.

Is she the tallest tribal leader in the country or has she been nominated because she ticks all the right boxes: Tribal woman, devout Hindu, origins in eastern India and a moving personal story?

The stature of a person is always a matter of individual perception and projection by the media. Sometimes pygmies are seen as very great people, but history might judge them as ordinary. Sometimes great people are not mentioned in the media at all.

As far as tribals are concerned, there have been many extraordinary people like B D Sharma [the former IAS officer and champion of tribals rights who passed away in 2015] and Mahasweta Devi [the acclaimed writer passed away 2016].

They were not tribals, but devoted their lives to the community.

Professor Sonajharia Minz, the current vice chancellor of the Sido Kanhu Murmu University. She is a professor of mathematics and scholar. There are many other tribals working towards advancement of the community.

The Dalits had an Ambedkar, but tribals did not have a pan-Indian figure like him.

Mrs Murmu is one among several tribal leaders. What is the most important concern of tribals?

Their land was taken away during colonial times through an act and brought under the sovereign domain of the king or queen of England.

That land is yet to be returned to them. Tribals had been cultivating on that land for the last 7,000-8,000 years. The British sovereign and the Indian State have stolen that land. We must return that land to them.

They need their land for livelihood which will in turn reduce migration.

They cannot dig the land enough because it belongs to the forest department. Therefore, their land is unirrigated and cannot sustain more than two crops a year. Hence, income is halved which forces them to migrate. Migration affects the schooling of children; it also leads to diseases.

It also leads to other issues like increased Hinduisation and increased Christianisation.

The land holding of a typical tribal family is reduced to one acre or less. In such a situation, the obvious and accessible alternative is education. Young tribals want good education, but the education delivered to them is below satisfactory. They are unable to afford the fee required by good institutions. Commercial-minded educational institutions do not cater to tribals.

The tribal right to quota in education is misunderstood and ridiculed. The two main things that tribals want are land and education. They are not making great demands on the nation, all that they want is a decent livelihood and remain connected to the past.

Mrs Murmu is from the Santhal community. How will you define this community?

The Santhals were among the first to rebel against the British. It is a community of good leaders. They created a script for their language several times and documented it in the written form. Santhali is recognised among the languages of India in the Eight Schedule.

Among the tribals, the first community to provide doctors were the Santhals.

Santhals are progressive, forward looking and a proud community who look for dignity and progress.

Is there much interaction between different tribal communities in India?

There is intimate interaction among them for several decades, but no mainstream media ever reports on that and unfortunately what is not reported ceases to exist.

Tribals are very well informed about the modern world and values because they are coping with that world and trying to save their own identity. In this backdrop, how can Mrs Murmu’s election change the current situation of tribals?

I wish I could say something heart warming. There are Dalits and Muslims in the BJP, but have they improved the lot of Muslims and Dalits?

Similarly, if there are tribals in the BJP, will the RSS say that it will not impose Hinduism on the tribals? Will the RSS stop saying that tribals are Hindus and recognise their religion?

That is wishful thinking and it will be wrong for me to raise the expectations of tribals because there will be a tribal President. They will be disappointed if their expectations are not fulfilled and feel further alienated.

Mrs Murmu is a citizen of India and any citizen can contest for the post. She has political support and will be remembered as the first tribal who became President which will provide hope to other tribals.

But we cannot expect magic because tribals issues have not been resolved for the last 150 years. It needs very determined, dedicated work over several decades to bring them on par with rest of India.

Australia has aggressively promoted its indigenous people in recent years. Do you think it is time for India to do the same?

The Australian prime minister apologised to tribals for taking away their land. They passed a law making it mandatory to begin every public meeting by acknowledging that the indigenous of Australia are the First Inhabitants of the continent.

India was among the few countries that did not sign the UN Indigenous and Tribals Peoples Convention. What more can I say?