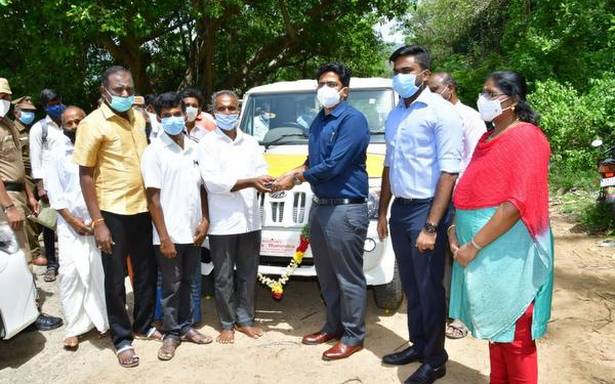 Using the vehicle, they can widen their consumer base

The Kani tribe’s age-old wish to have a goods carrier of thier own to transport their produce to consumers living in the plains has been fulfilled with a gift from NABARD.

The Kani tribes who live near Papanasam and Servalar dams in the Western Ghats cultivate pepper, tapioca, gooseberry, jackfruit, lemon and collect minor forest produce such as honey. They sell these products to the public, particularly to traders in the plains. In some cases, they have to bring these produce to the plains in buses to sell them.

Whenever transport operations were suspended in the past and during this lockdown, head-load was the only option available to them to sell the small quantity of their produce to buyers and it had badly affected their already small income through which they eke out a living.

Now, the National Bank for Agriculture and Rural Development (NABARD), under its Tribal Development Programme, has come to their rescue by providing them a goods carrier to transport their produce to buyers living in the plains and return home within the next few hours after selling it at the right price even as their consumer base would get widened.

Mr. Vishnu promised them to provide sufficient space in the ‘Pon Bharani’ complex near the new bus stand in Tirunelveli, an easily accessible spot situated on the busy road, to sell their produce, all organic products. “We are working on getting ‘organic products’ certificate for the farm produce of Kani tribes. Moreover, efforts are on for the value addition of jack fruit, gooseberry and fig, which will ensure more revenue for these people,” said Mr. Madhan.

Kani tribal people were also vaccinated for COVID-19 on the occasion.