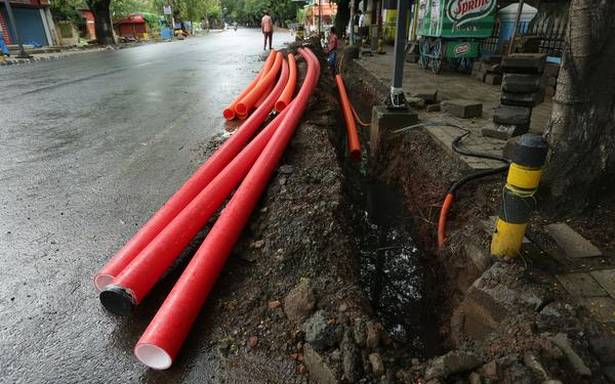 Portions dug up will be restored after final tarring, says CSML

Resentment is brewing against trenching of recently relaid roads and footpaths to lay power / telecom cables and water pipelines in various parts of Kochi.

The latest was the trenching of Park Avenue Road right in front of the Kochi Corporation office, which was milled and resurfaced recently by Cochin Smart Mission Limited (CSML) as part of its ‘smart road’ initiative.

With NGOs like Ernakulam Vikasana Samiti registering strong protest, CSML said the final layer of tar coating was yet to be done on the road. Trenching to lay power cables was permitted after dense bituminous macadam (DBM) work was over. The duct laid on the road is located on the other side. The trenched portion will be restored and electric poles installed before final tarring is done, CSML sources said.

The Samiti had maintained that cables ought to have been laid before resurfacing work was done since it could now weaken the road. CSML sources said trenching had to be permitted since there was delay in arrival of power cables. “DBM tarring was done to restore the road and since the High Court directed us to speed up tarring on Park Avenue Road,” they added.

The footpaths relaid by Kochi Metro Rail Limited (KMRL) around three years ago too have suffered damage due to trenching.

A couple of other roads, including Convent Road and TD Road, that CSML had resurfaced earlier this year too were trenched for repairing pipelines and cables and left improperly restored. The agency filed a police complaint citing that it had no idea as to who had trenched a part of TD Road.

“We had informed all agencies well in advance before resurfacing the roads, to execute their work, if any, before we began black-topping work. We also made it clear that they would have to restore any resurfaced road that they trenched subsequently, as per our quality standards,” CSML sources said.

KMRL has, in the meantime, dismantled a portion of the footpath on the Thykoodam-Pettah stretch that it had relaid around three years ago, inviting much flak. “We had to do this since the rebuilt drains sank when the road alongside was resurfaced. The foopath on the stretch will henceforth be raised and paved using tiles,” metro sources said.