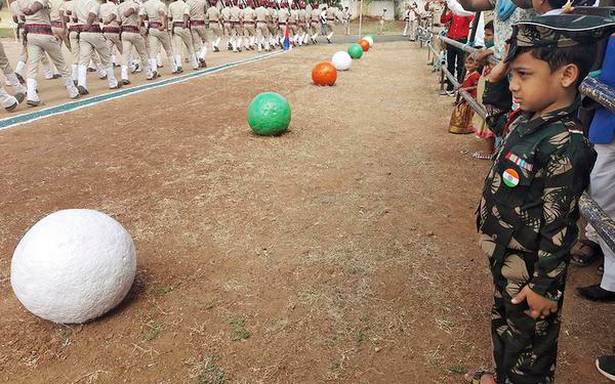 Recalling the renaming of Hyderabad Karnataka region as Kalyana Karnataka by the previous government headed by the then Chief Minister B.S. Yediyurappa, Minister of Large and Medium Industries and Kalaburagi district in-charge Murugesh Nirani has urged people and the State apparatus to work hard for the development of the backward region.

“The term Kalyana [welfare] Karnataka should not remain only on paper. We have to collectively work hard to translate it into a reality. We are preparing Kalaburagi Vision 2030 that envisages the all-round development of Kalaburagi in the next 30 years and I appeal to people, people’s representatives, intellectuals and media fraternity to join hands with the government to implement the visionary programme,” he said, after hoisting the national flag at the District Armed Reserve Police Grounds to mark the Independence Day here on Sunday.

Elaborating his government’s plans to develop Kalaburagi into a major industrial hub in the region, Mr. Nirani said that the New Industrial Policy 2020-25 adopted by the government will help realise the goal.

“All the taluks in Kalaburagi district are put under Zone 1 in the New Industrial Policy [2020-25] so that they can get the maximum incentives and tax concessions for establishing new industrial units. We are developing a solar energy park with an installed capacity of 500 MW on 1500 acres of land in Farhatabad near Kalaburagi. The Union government has sanctioned a mega textile park for Kalaburagi which will come up on a 1,000-acre plot. We are also planning to develop a jewellery park in the district. Apart from these new projects, we are planning to develop an industrial estate on 5000 acres of land to attract big industries to Kalaburagi. I hope that these measures, coupled with air connectivity, will impress industrialists to open their units here,” Mr. Nirani said.

Reiterating the Union and State governments commitment to the development of the farming communities in the country, Mr. Nirani said that 2.68 lakh farmers in the State had together got ₹517.38 crore under the Pradhan Mantri Kisan Samman Yojana.