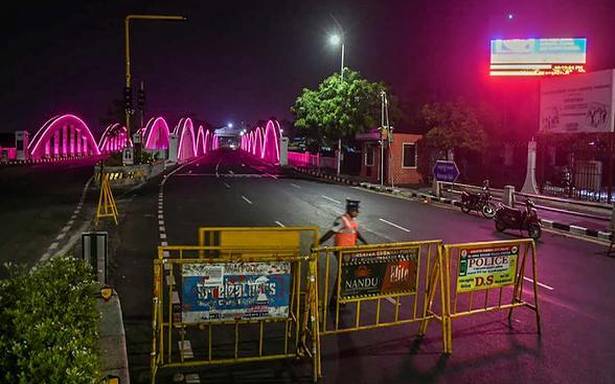 Flyovers, bridges closed for traffic; check-points set up on arterial roads in city

All tourist spots, including the Nilgiris, Kodaikanal and Yercaud hill stations, were closed on Tuesday as restrictions to contain the second wave of COVID-19 came into force in Tamil Nadu.

The authorities also began enforcing a night curfew between 10 p.m. and 4 a.m.

In the Nilgiris, boatmen staged a protest to highlight their concerns over the loss of livelihood.

In Chennai, most arterial roads, flyovers and streets wore a deserted look following the implementation of night curfew. The entire city is under the surveillance of the police.

Police in the city said 38 flyovers and 75 bridges were closed during the night.

Check-points were set up on arterial roads, such as Anna Salai, Poonamallee High Road, Kamarajar Salai and Sardar Patel Road, among others. Smaller roads leading to major ones were also sealed.

Chennai Police Commissioner Mahesh Kumar Aggarwal said, “Intensive vehicle checks are being conducted in 200 places on arterial roads. Over 2,000 men have been deployed to implement the curfew effectively from 10 p.m., as per the guidelines of the government. The message on night curfew has reached the people. We have started checking the movement of vehicles.”

As Section 144 of the Code of Criminal Procedure has been promulgated, action will be taken against violators and cases will be booked against them under relevant provisions of the law, he said.

Vehicles of those loitering without any purpose would be seized, the Commissioner warned.

In addition to night-round officers, personnel will be deployed to enforce other COVID-19 restrictions effectively, he said.