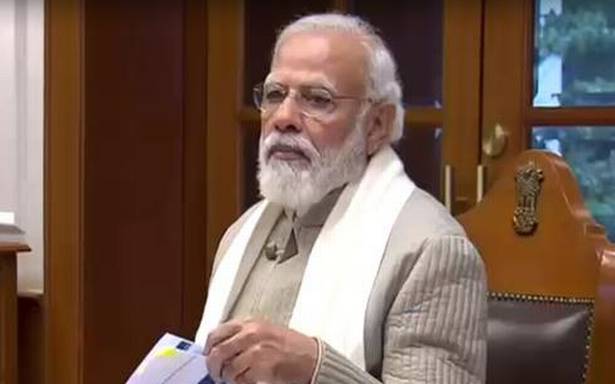 Mr. Modi chaired the meeting to review the COVID-19 situation in the country as the Omicron variant of the virus fuels a surge in cases. The meeting was held virtually.

Out of these, 65 are from the Rajya Sabha secretariat, 200 from the Lok Sabha Secretariat and 133 belong to allied services.

An apex court official said that out of the 32 judges in the apex court, at least four judges, and 150 out of the nearly 3,000 staff members, are currently infected with the virus.

The boat, named ‘Yaseen,’ was caught by an ICG ship during an operation on January 8 night, State Defence Spokesperson said.

This is the first arrest made in the case, police said. Hundreds of Muslim women were listed for “auction” on the mobile application with photographs sourced without permission and doctored. Accused Aumkareshwar Thakur (26) did his BCA from IPS Academy in Indore and is a resident of Indore’s Newyork City Township, they said.

These trials are part of demonstrations by aircraft manufacturers to showcase the compatibility of their aircraft to fly from Indian Navy’s aircraft carriers which use a ski-jump to launch aircraft, one official explained.

The CBI has booked Rama Krishna Knitters Private Limited, which once enjoyed the status of an “export trading house” as recognised by the Directorate General of Foreign Trade (DGFT), for allegedly cheating a consortium of four banks to the tune of ₹161.91 crore. The company had units in Ludhiana and Preet Vihar.

In an interim order on January 7, the Supreme Court allowed resumption of medical counselling for NEET-PG admissions for the year 2021-22.

164 people killed, 5,800 detained in week of protests in Kazakhstan: officials

The country’s Health Ministry said 164 people, including three children, were killed. Most of the deaths — 103 — were in Almaty, the country’s largest city, where demonstrators seized government buildings and set some afire, according to the Ministry.

Mr. Patel will serve on a three year term as one of the multilateral development bank’s five vice-presidents, and will take the place of former Gujarat Chief Secretary D.J. Pandian who had been, as vice-president, leading the AIIB’s investment operations and all sovereign and non-sovereign lending in South and Southeast Asia.

Indigo said with reduced demand it will also selectively withdraw some flights from service.

The 20-year-old from Almora had a good outing in the last season as he reached the final of Dutch Open, made it to the semifinals at Hylo, and then entered the knockout stage of the World Tour Finals on debut.

Ashes 4th Test, Day 5 | England clings on for a draw in dramatic Test

Jack Leach, Stuart Broad and then Jimmy Anderson batted out the final 10 overs under immense pressure.