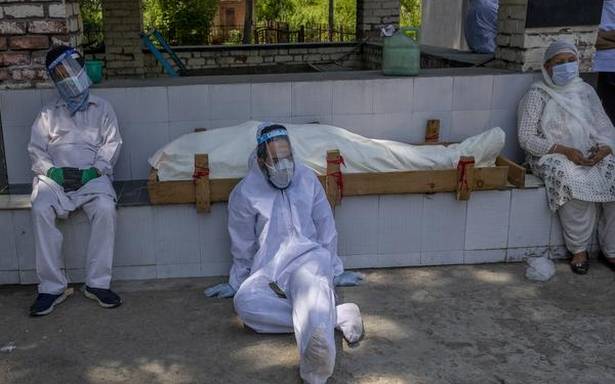 India pushes for more studies on origins of COVID-19

India has pushed for further studies into the origins of the COVID-19 virus, as the World Health Organisation’s decision-making body, the World Health Assembly, reviewed the findings of its special team.

Top court adjourns hearing in matter to May 31.

The apex court ordered district authorities across the country to immediately fan out and identify these children in need of care and provide them with basic needs like food, shelter and clothes.

Tamil Nadu Chief Minister M.K. Stalin announced that provision stores would be allowed to sell essential supplies through carts or vehicles in their respective localities with permission from local bodies.

Siddharth Pithani was among the four persons who were present at Rajput’s Mumbai residence when his body was found on June 14, 2020.

Lakshadweep MP P.P. Mohammad Faizal said that Nationalist Congress Party (NCP) chief and former Union Minister Sharad Pawar has sought time from Home Minister Amit Shah to urge him to recall the Union Territory’s administrator Praful Khoda Patel, and failing that, he would be approaching the courts to put an end to Mr. Patel’s plans for the Islands.

The order came on a petition filed by the lawyers of Choksi, who was detained in Dominica for “illegal entry”.

The resolution was adopted as 24 countries voted in favour of it while nine opposed it at the end of an all-day special session of the 47-member U.N. body at its headquarters in Geneva.

The war games, dubbed Steadfast Defender 21, are aimed at simulating the 30-nation military organization’s response to an attack on any one of its members. It will test NATO’s ability to deploy troops from America and keep supply lines open.

The 43rd GST Council meeting, chaired by Finance Minister Nirmala Sitharaman and comprising state finance ministers, is being held via video conferencing. The council is meeting for the first time in nearly eight months.

The social media giant said in February it will ban false claims about coronavirus and vaccines, including that COVID-19 is man-made or manufactured, vaccines are not effective in preventing the disease, and that vaccines are toxic and dangerous.

World Test Championship | India, NZ to be adjudged joint winners in case of draw or tie

According to the playing conditions unveiled by the global body, “a draw or a tie will see both teams crowned as joint winners…” The ICC has also allocated a Reserve Day to make up for any lost time during the regular days of the Final, scheduled to be played from 18 to 22 June, with 23 June set aside as the Reserve Day.