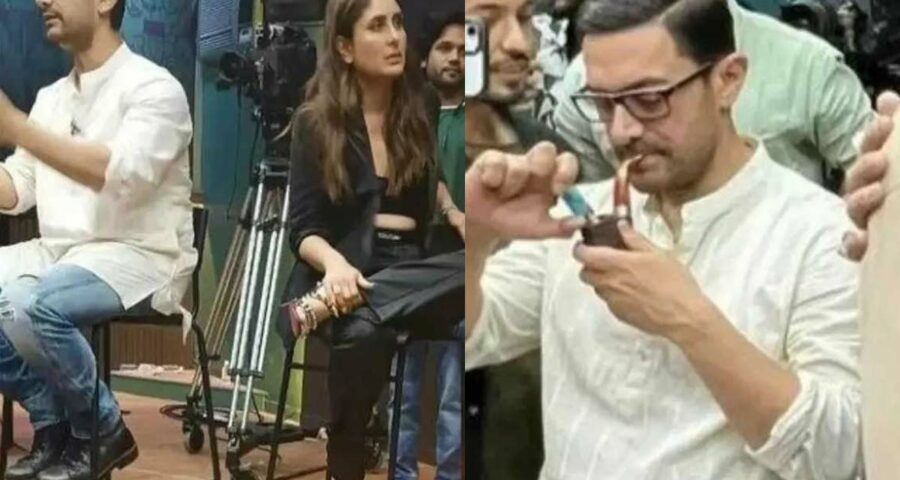 Bollywood Top actor Aamir Khan will soon grace the couch of Karan Johar’s hosted chat show Koffee With Karan  Season 7 along with his Laal Singh Chaddha co-star Kareena Kapoor Khan.  They are coming together to promote their upcoming movie of the popular talk-show. Meanwhile, several behind-the-scenes photographs of the two has gone viral on the internet, and what caught the eyes of the netizens is Aamir Khan smoking a pipe on sets.

Few pics from the sets of Chat show are going viral on the social media. Coming on the pic,  Aamir  Khan is seen smoking a pipe while Kareena Kapoor Khan is seen sitting next to him.  She wore black outfit while Aamir sported a white kurta and jeans. One of the pictures also features Karan Johar in which he was seen taking pictures with fans.

One of the netizen wrote, “Oh damn, people still use that smoking pipe?.” Another user wrote, “Aamir  Khan has started smoking again because of the stress.”

Aamir and Kareena shot for their episode on Tuesday evening. A news 18 report, quoted a source revealing that Aamir and Karan had an interesting discussion on the North-South divide. Karan also questioned Khan about his choice of films and whether he purposefully chooses projects with a social message.

Both Laal Singh Chaddha star Aamir and Kareena shot for their episode on Tuesday evening.  The reports are coming that  they had an interesting discussion on North-South divide.