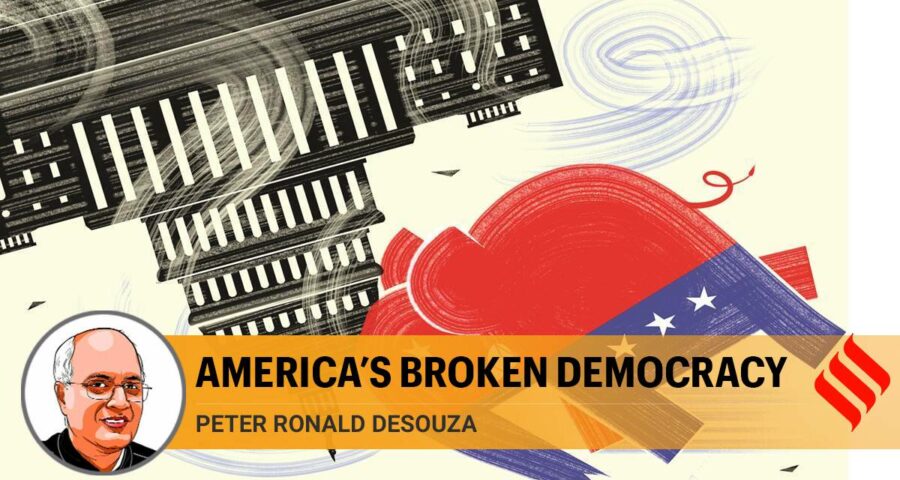 America will need to examine why a narcissistic leader, with plebiscitary power, was able to expose the fragility of its institutions and push them to the brink. One is tempted to see the bizarre rioting in the US Capitol by thousands of Donald Trump supporters seeking to stall President-elect Joe Biden’s certification by Congress as a one-off event, a unique descent into madness by an essentially robust democracy. Such a reading is fundamentally wrong. The mobs storming the hallowed precincts of American democracy, on January 6, were not an exceptional lapse but were, in fact, a symptom of a sick democracy. American democracy is critically ill. It suffers from five disorders.

The first malady, and perhaps the one most difficult to treat, is the breakdown in the culture of bipartisanship that was so intrinsic to American politics. It kept the system working. Difference and consensus, intense competition and compromise, all produced a political pragmatism that was at the heart of American democracy. This has now been abandoned. The speeches delivered by Republican senators on the floor of the house, minutes after the assault on the Capitol, were hostile and unyielding. Instead of closing ranks and accepting the logic of defeat, of embracing the national interest which their leader Mitch McConnell had earlier in the day articulated, a large number of Republican Congressmen chose to pander to the President’s narcissistic delusion of a stolen election. Partisan interest got morphed with the national interest. For them, the enemy was the Democratic party and not the mobs, the electoral system and not the hooligans who were undermining it. Bipartisanship in America is dead, killed by an ideological chauvinism that sees competitors as the enemy within. This is a mindset that is difficult to treat. It is built on a psychology of hate that resides deep in the soul of its proponents. It is incapable of compromise and challenging to cure.

The second malady feeding the first, and perhaps dependent on it, is the rise of the plebiscitary leader. The more appropriate term is to see Trump not as a populist leader but as a plebiscitary one. A plebiscitary leader speaks directly to his followers over the heads of institutions that are supposed to constrain him but have, as shown, little power to do so. A relationship of devotion develops between the leader and followers that is unmediated by the institution’s tempering logic. The leader provides the followers with meaning, with a view of the world that speaks to their anxieties and insecurities. This is essentially Max Weber’s thesis on the charismatic personality. Trump fits it to a T. He built his constituency with phrases and slogans such as “make America great again”, “drain the swamp”, “lock her up”, “stop the steal”, that created a partisan constituency both in the street and within the elected chambers. It was willing to walk with him to the ends of the earth. Social media aided the process of partisan constituency formation. It exaggerated the feeling of grievance and promised that the leader would address the problem. Trump was playing for a “winner takes all” stake since defeat is for losers. In such a politics, institutions get enfeebled, democratic conventions get ignored, and the locus of power shifts from the office to the political leader. Officials, seen as Wilhelm Reich’s “little men”, develop an attitude of complicity with the leader. In Trump’s America, the little men have come to the centre of government.

The third political illness, which thrives in tandem with the above two, is the debilitation of institutions. Institutions are the life and soul of a democracy. They check the excesses of power, socialise elected representatives into the do’s and don’ts of democratic politics. They embody the rules and conventions that maintain the balance between private and public interests. Trump tore into these checks and balances. When his chiefs of staff, and several of his secretaries opposed his views, he just replaced them. When the mainstream media, such as CNN, The New York Times and The Washington Post, wrote about his transgressions, he mocked them describing them as purveyors of “fake news”. In his drive to dominate institutions, Attorney General William Barr became his bulldog. The leader of the Senate, Mitch McConnell, became his praetorian guard and Lindsey Graham his dancing cheerleader. Mark Milley, the Chairman of the Joint Chiefs of Staff, who accompanied Trump for a photo-op to a church in Washington, after it had been forcibly cleared of protesters, apologised for this compromise.

One has, over the last four years, watched with horror and disbelief as the custodians of America’s democratic institutions succumbed to the narcissism of their plebiscitary leader. Even small conventions, although symbolically significant, that established the principle of conflict of interest were cast aside by Trump when he appointed family members to high office and refused to release his income tax returns as had been the convention with previous presidents. Trump took a sledgehammer to institutions. They were unable to corral him. He exposed the fragility of their checks and balances. Biden will have to work hard to repair them.

The fourth malaise is the elite capture of not just institutions but of the political discourse. Much has been written about elite capture of institutions, so let me dwell here on the capture of discourse. Gaetano Mosca, the Italian theorist of elites, referred to it as “political formulas”. These are arguments and explanations used by elites to get those over whom they rule to accept their ideas and arguments. Political formulas give legitimacy to elite rule. American democracy today is a textbook illustration of how the political formula of neo-liberalism has been used by capitalist elites to not just accumulate wealth but to make the non-elite feel that such accumulation is in the public interest. From the World Economic Forum to the humble corridors of Niti Aayog, the “political formulas” of neo-liberalism economics rule. As Jean Paul Satre would have said, Davos speaks and Niti Aayog provides the echo. Trump is neo-liberalism’s loudest spokesperson.

The above maladies have gained a life, and become possible, because of the fifth malaise in American society — its increasing inequality. It provides the soil for Trumpian mobilisation. This increasing inequality of American capitalism needed a spokesman and a cover, to convert a lie into a truth. Trump provided both. He changed the vocabulary of politics, making it respectable to mock, deride, denounce and heap scorn on one’s political adversaries. Attention had to be distracted from the real challenge of increasing equality. Trump made vigilante politics, especially of the White supremacist variety, a legitimate aspect of American politics. It is worrisome that his model of politics is now available for other plebiscitary leaders. With his politics of hate, in this climate of inequality, it is little wonder that the master of vituperative social media posts brought the Capitol under siege. To heal itself, American democracy will need more than just the replacing of Trump with Biden. It will need to examine why a narcissistic leader, with plebiscitary power, was able to expose the fragility of its institutions and push them to the brink.

This article first appeared in the print edition on January 11, 2021, under the title “America’s broken democracy”. The writer is D D Kosambi Visiting Professor at Goa University. He has just published with Rukmini Bhaya Nair a book titled Keywords for India. Views expressed are personal