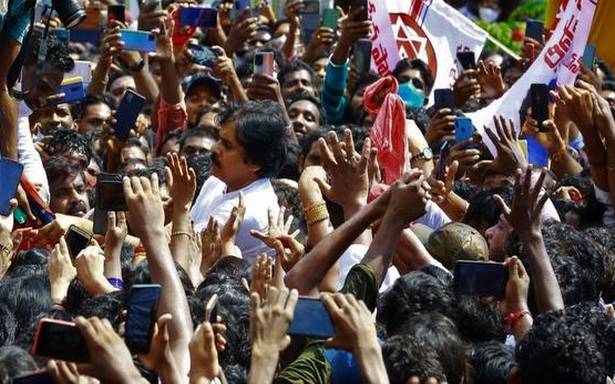 ‘Leaders of Kapu, Telana, Ontari communities have a role to play’

Jana Sena Party (JSP) president Pawan Kalyan on Saturday appealed to the leaders and elders of the Kapu, Telaga and Ontari communities to unite and lead the battle being waged against the YSRCP.

The way the Kapu movement had been weakened should serve as a lesson, Mr. Pawan Kalyan said while addressing a public meeting here.

“Post 2014, the Kapu movement has been weakened. It is time for the Kapu, Telaga and Ontari communities to unite and join me in the struggle. You should shoulder this responsibility,” the JSP president said.

“I am not an enemy to any community. If the three communities join the JSP, the others – Setti Balija, Toorpu Kapu, and Velama, and Dalits and minorities – will also join us in the fight,” he observed.

“Such a united movement will inspire the leaders in the neighbouring Telangana too. For seven decades, all these communities have been deprived of their opportunities. It is time for the elders of these communities to play the role of the big brother in Andhra Pradesh,” Mr. Pawan Kalyan said.

“I will remain in politics till my last breath. I had waged battles against those with criminal background and sound financial resources,” Mr. Pawan Kalyan said.

“The Godavari region should play the leading role for the united fight against the ruling dispensation,” he said.

Earlier, launching the party’s State-wide initiative to repair roads, Mr. Pawan Kalyan participated in the ‘shramadaan’ and repaired the road in the village.

Addressing a public meeting at the Kothacheruvu village after participating in the road repair work through Shramdaan in the eevening, Mr. Pawan announced the JSP would not contest the Badvel byelection and was for the unanimous election of deceased MLA’s wife.