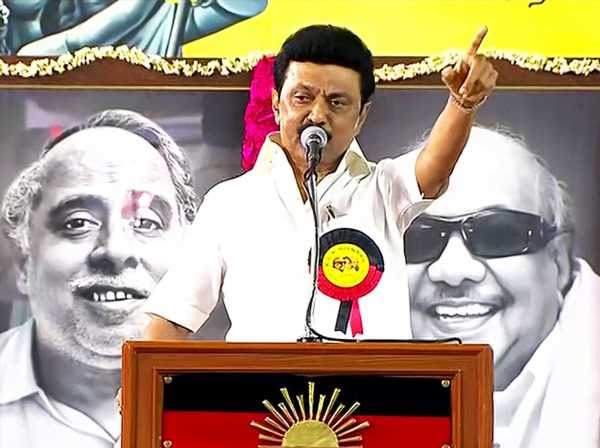 Tamil Nadu’s voters wanted tough leaders at the helm, to the point of being autocratic.
It was what Karunanidhi, MGR and Jayalalithaa ended up becoming, observes N Sathiya Moorthy. 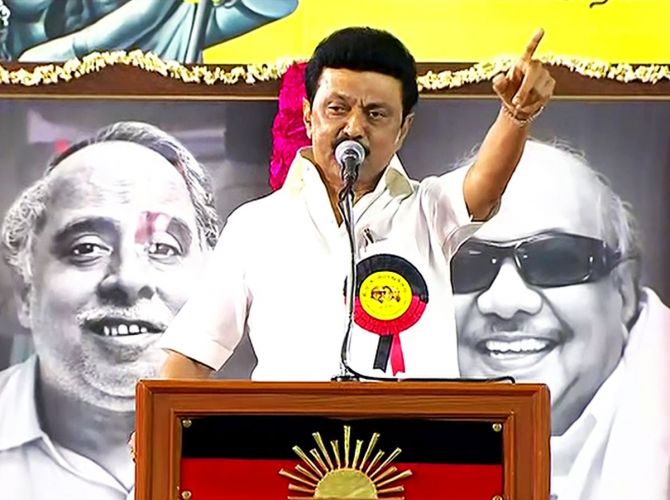 At a time when the rival AIADMK is in sixes and sevens years after supremo Jayalalithaa’s death, the ruling DMK in southern Tamil Nadu is ill at ease, what with Chief Minister and party boss M K Stalin showing continual signs of weakness in running the affairs of the government and the party.

If, however, the two ‘Dravidian’ majors see themselves as competitors to each other, it is also because the ruling BJP at the Centre has been handing over one socio-political issue after the other on a platter, even as the state unit and its Hindutva social media are drumming up old and forgotten, religious-centric issues that had little electoral purchase even decades ago.

The AIADMK is possibly the only regional party in the country — it saw its golden jubilee on October 17 — to be caught up in ever-weakening internal feuds, whose count party cadres and media observers have lost count of since Jayalalithaa’s death in December 2016.

It should have been a time for the DMK to have stabilised its hold over the masses, especially after the Stalin leadership proved its mettle in successive elections to the Lok Sabha (2019) and the state assembly (2021), when it overthrew the AIADMK rule of the previous years and making Stalin chief minister for the first time in his 50-plus years of political career.

Nothing explains Stalin’s leadership predicament than his open appeal to partymen at the DMK general council meeting a fortnight ago, where he was unanimously elected party president for the second time in a row.

The first time, it happened after his father and party patriarch M Karunanidhi passed away in 2018, after having been the longest-serving elected political party leader in the democratic world. 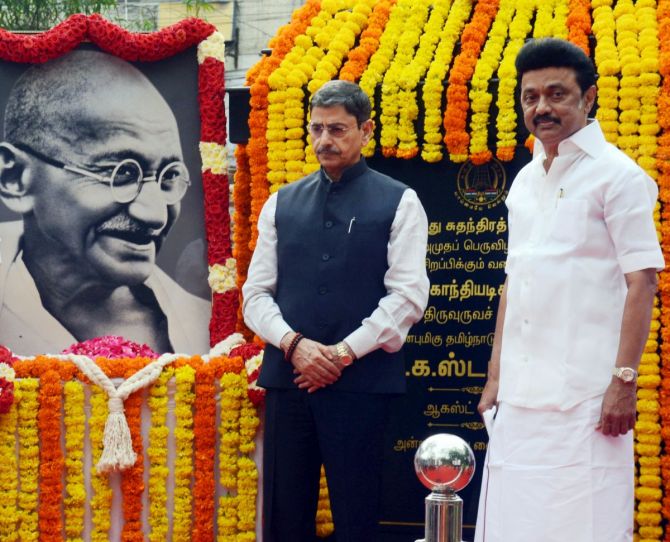 As chief minister, Stalin is known to assign jobs and responsibilities to individual officials at the top, having hand-picked them for their integrity, possibly more than efficiency.

The dichotomy has come to play havoc in certain instances even as some of the chosen officials close to the chief minister, owing to official contingency, are believed to be running parallel administrations, after having placed their friends, favourites and batch-mates in key positions of decision-making.

According to some media reports, Stalin is aware of such manipulations and has seemingly given a long rope for all those officials, either to climb up or tie themselves in knots, if not hang themselves with. But that is not helping his image or that of his government and party.

Before his time, Karunanidhi and Jayalalithaa and also the latter’s mentor M G Ramachandran were known and seen as being tough decision-makers, especially when it came to enforcing their writ, and their writ alone, across the bureaucratic apparatus.

They did listen to various views and obtained different inputs, and Karunanidhi especially was open to being accommodating of alternate suggestions and opinions without standing on prestige. But seldom could anyone claim that select bureaucrats were running the government at their will, or had a monopoly over guiding/misguiding the chief minister.

That includes MGR, who was unpredictable, yet officials would let files pile up on the chief minister’s table rather than do anything otherwise.

So much so, Karunanidhi was believed to have branded senior bureaucrats an ‘Us’ versus ‘Them’ format in his early years as chief minister running into the seventies.

It did not stop with Brahmin/anti-Brahmin categorisation, but also as pro-DMK and pro-Congress, the latter after the party that had been in power before the DMK came to power in 1967 under founder C N Annadurai.

As chief minister, MGR was known to have caused the mass exit of seven or eight senior-most IAS officers after they found his government ‘non-functional’.

The longer Jayalalithaa stayed as CM and the more times she returned to elected power after a break, her assertiveness became a sign of arrogance.

Bureaucrats seldom dared to speak their minds on issues and programmes.

In a particular instance, she had the management of a private sector star hospital sack a surgeon after he had hinted at the chief minister to remove her shoes while entering a patient’s room. 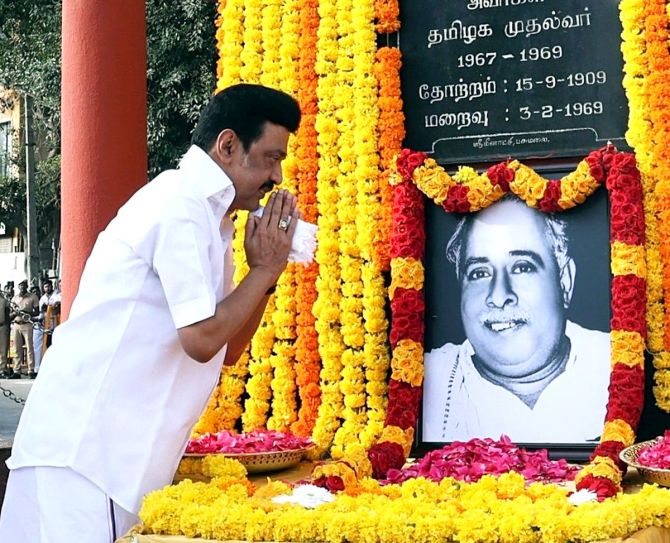 No one has heard any such stories about Stalin’s chief ministership in the past nearly one-and-a-half years.

In his case, his carefully-mastered ways not to hurt others has become a burden for the party, especially in this social media era.

Not a week, if not a day, seems to pass without one senior minister or the other, one senior leader of the other, causing political embarrassment for the party and the leader.

And the rival BJP/AIADMK social media operatives have not failed to spread it across — which anyway is their job.

In comparison, the DMK, which is often accused of winning early elections only on the strength of its propaganda and outreach, is still at a loss in the social media field.

This is despite the fact that two successive poll and political strategists, including Prasant Kishor, had contributed to the party’s successive electoral victories, in 2019 and 2021.

In his time, Karunanidhi, having taken over as chief minister and party leader after Annadurai’s passing, did not flinch from putting every competitor, real and imaginary, in his place, until there was only one place at the top.

He did not even leave out MGR, the charismatic film actor, who was a vote-getter, cadre-provider and also fund-raiser.

Karunanidhi was willing to take the risk — and paid for it, too, as MGR’s AIADMK captured power subsequently.

Karunanidhi got his next chance to be CM only after MGR’s demise, a decade and more later.

MGR put himself way above the party and the second line, something that Jayalalithaa did from day one.

That she did not have MGR’s filmi charisma and political acceptance, the latter born out of his long years in the DMK, did not matter to her.

Against these precedents, Stalin adopted a soft approach to senior party colleagues, who anyway might have overstayed their positions in the party and government, blocking the way for elevation and future plans for the party at the state and district levels.

Unlike Karunanidhi, who wielded the axe against those whom he had grown up with, Stalin finds it difficult to stop their over-assertive ways, which has had no place in Dravidian politics, known for its top-down approach bordering on the assertiveness of the Jayalalithaa kind.

So much so, across the state in many municipalities and panchayats, local DMK leaders defied the leadership directive after seat-sharing with traditional electoral allies.

Barring a few symbolic instances, the party did not, or could not, initiate disciplinary action against those ‘rebels’.

This has not gone down well with the allies who, given Stalin’s continued popularity at the time, earlier this year, could only murmur their protests, in private. 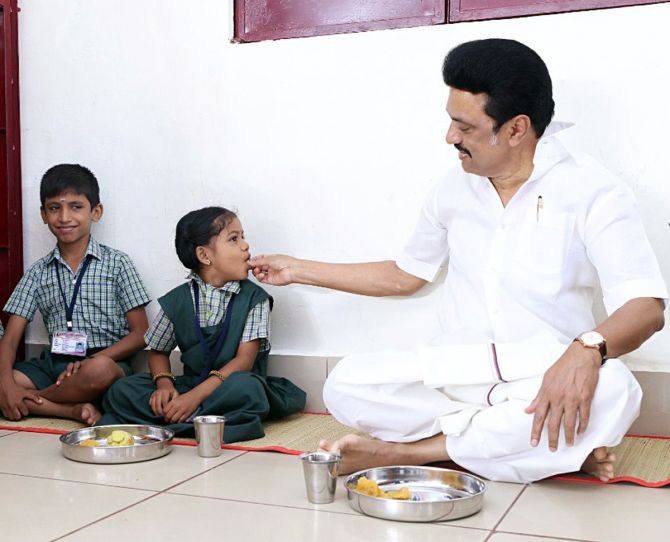 This was never the case with MGR or Jayalalithaa, and not even in the post-split DMK under Karunanidhi.

The latter did not flinch sacking his older son and former Union minister M K Azhagiri for defying the leadership and fielding ‘rebel’ candidates in the 2011 assembly polls, contributing to the defeat of the official nominees in some constituencies.

Azhagiri could never ever regain entry into the party though Karunanidhi lived for another seven years, and was under pressure from some of the other family members to ‘re-unite’ the party in his time.

Historically, Tamil Nadu has voted for strong leaders, barring one occasion in the first general elections in 1952.

At the time, the ‘Composite Madras State’, in the era before the Linguistic Reorganisation of States, had elected a hung assembly, the first instance of the kind, post-Independence. Erstwhile Congress leader Chakravarti Rajagopalachari ‘Rajaji’, who was also the nation’s only Indian governor general, positioned himself as chief minister, by engineering wholesale defections from the Commonweal Party that had contested and won seats against the national party.

Rajaji’s tenure at the head of government — the first was as premier in the pre-Independence Madras Presidency (1937-1939) — was filled with uncertainties; he won a confidence vote on the strength of Speaker A Sivashanmugam Pillai’s ‘casting vote’.

Never ever afterward did the state — now, exclusively Tamil-speaking, from 1957 elections — voted in a ‘hung assembly’ or a ‘tentative government’.

It is a reflection on the voter mood on ‘stable governments’, giving the nation a unique impression that Tamil Nadu always voted one-sided even in successive Lok Sabha polls.

For the leadership of political parties, it means that the voter wanted them to be tough leaders at the helm, and gave them full cooperation and support — for being tough, to the point of being autocratic.

It was what Karunanidhi, MGR and Jayalalithaa ended up becoming.

Which is what AIADMK’s Edappadi K Palaniswami wanted to be, and became, both while in power and afterwards, too.

Maybe Stalin wanted to be different and usher in a new political culture, but the party especially is not cooperating — so does a section of the top bureaucracy that had never had it so good, and is seen as misusing the same.

The results are for everyone to see, and for the DMK to suffer in future elections, especially if the AIADMK infighting ends up one way or the other.

In such a case, Stalin’s open appeal in the DMK general council that he was having ‘sleepless nights’ because of party men, including senior ministers, would be used as a peg to beat him with — and he would have none else to blame!