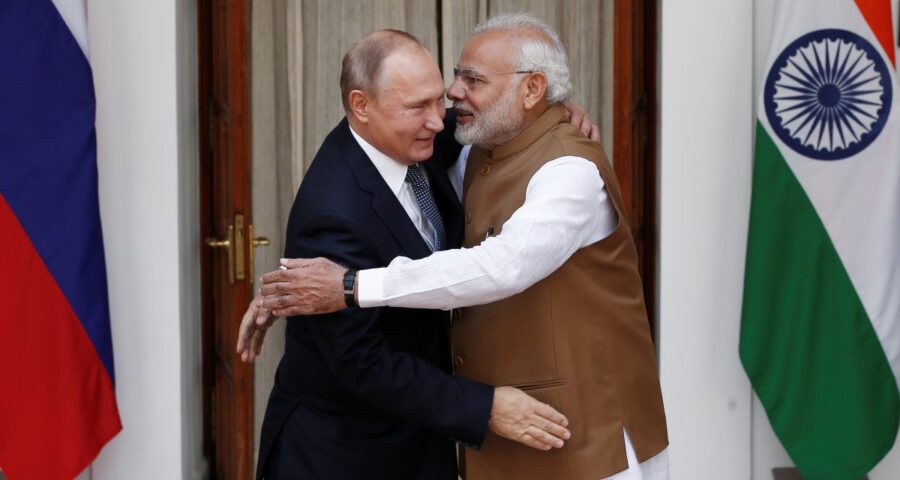 We can make a beginning by openly acknowledging the Russian help in 1971 victory when President Putin visits India today. Showing gratitude to a friend is part of our DNA, notes Colonel Anil A Athale (retd).

On the 9th August (a date of historical significance as start of ‘Quit India’ movement) in 1971, exactly fifty years ago, India and Soviet Union (Russia for all intents and purposes) signed a historic Peace and Friendship treaty.

It is this treaty that helped India overcome the attempt by Anglo-American navies to interfere and also deterred China from mischief on land border while India went about dismantling Pakistan and create a new country of Bangladesh.

It will not be an exaggeration to say that the Russian military help played a very major role ensuring Indian victory in the 1971 war against Pakistan.

The 1971 Indian victory was not just a blow to the US, but also to China, as both had ranged on side of Pakistan and against India.

Just as India began preparing to enter erstwhile East Pakistan, the Anglo-US naval forces led by the aircraft carriers Eagle and Enterprise respectively, attempted to move into the Bay of Bengal.

Unfortunately for the Anglo-Americans, the Russian Task Force 40 was close on their heels. This force was supported by Russian nuclear submarines.

Not wanting to confront the Russian navy, the Anglo American force withdrew into the Indian Ocean.

There was apprehension that like in 1965 where China created an incident on the Sikkim border, this time too they would mass troops on our northern border and tie down a substantial strength there.

To deter China from taking any action against India, Russia — which in normal times had only about 3-4 motorized divisions guarding the border with China and Outer Mongolia — raised the troops level ten times to nearly 42 divisions.

Given the history of the 1969 clashes on the Ussuri river between the two countries, China could not take chances and had to deploy the Peoples Liberation Army on its border with Russia.

Both these actions by Russia ultimately helped India liberate Bangladesh.

It will not be an exaggeration to say that the foundations for victory in December 1971 war were laid on that fateful August 9, 1971.

The Anglo-American moves and Chinese threats as well as Russian countermoves, while not exactly street knowledge, were/are well known to most discerning analysts.

The surprising part is that despite these well known facts, the celebration of this important date was rather muted to say the least.

This throws up an intriguing question as to why it is so.

The possibility is that given the current state of India-US relations, India possibly wishes to play down the USS Enterprise episode.

The only explanation could be that even 75 years after Independence there is a strong pro-British lobby that like the proverbial wise monkeys, sees no evil as far as the British are concerned.

In reality, once we signed the ‘Peace and Friendship’ treaty with the Soviet Union, for all intents and purposes, we became their ally.

But since we have been maintaining the fiction of unchanging policy, (that was wrongly) elevated to the level of principle; we tried to hide the truth from the public.

Historically, Vladivostok once used to be part of China’s Qing dynasty and was known as Haishenwai. It was annexed by the Russian empire in 1860 after China’s defeat by the British and the French in the Second Opium war. Since then, it is part of Russia and is the capital of Primorsky Krai province.

China is a revanchist state. Its claims on Arunachal Pradesh as ‘Southern Tibet’ or various islands in South China Sea are based on its reading of history.

Currently as it is in an adversarial relationship with the US, it has signed a treaty of friendship with the Russian Federation as its immediate aim is absorption of Taiwan.

But at some future date it is bound to advance its claims on the Russian Far East.

Without possession of the Far East, Russia wil be reduced to a middling European power, far less a global superpower.

As China’s military muscle begins to match its economic might, Russia faces a daunting prospect of being reduced to China’s ‘Canada’ — worse China’s Mexico.

No Russian leader, least of all an ambitious one like Vladimir Putin can relish that prospect.

The only other neighbour capable of challenging China on land is India.

Russia faces daunting challenges in retaining its Far East. For a vast and fertile area, it has a miniscule population of 6.3 million. Even that is declining at 14% per annum.

In 2016, to remedy this situation, Russia has begun a programme to settle 500,000 Ukrainian Russians in the area. Currently this area is one of the world’s least populated one, with just one person per sq km!

I travelled along the Trans-Siberian rail network in 2015. The border area between China and Russia — a full 7,600 kms (including the border with nominally independent Mongolia is ideal tank country with no major obstacles for movement of large mechanised forces.

On this border as opposed to Russia’s 280,000 strong army China has 9.7 million strong ground forces.

Russia has to guard its western borders as well as NATO continues to encroach upon its area of influence.

It must be noted that most of the Chinese forces, especially its heavy weaponery is of no use on its border with India or its aim to militarily annexe Taiwan.

The only possible destination is the Russian border.

The peace treaty with China notwithstanding, no Russian strategist can afford to ignore the potential Chinese threat to the Russian Far East.

Intentions of nations can change, but the geography remains so also the threat as signified by the military equipment.

It is inexplicable why the Americans and NATO strategists continue to ignore geographical realities and continue to push an unwilling Russia into Chinese arms unless their policy of containing China is a big charade!

Whatever that be, India must be alive to the Russian dilemma and continue its strategic ties with Russia in order to deal with the Chinese threat.

We can make a beginning by openly acknowledging the Russian help in 1971 victory when President Putin visits India today, December 6, 2021. Showing gratitude to a friend is part of our DNA.