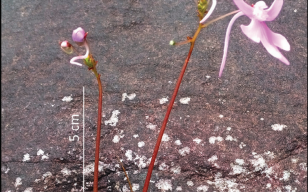 Two of them named after V.S. Achuthanandan and K.K. Shailaja

Researchers have identified three new species of wild balsam in Kerala, of which two have been named after Communist veteran and former Chief Minister V.S. Achuthanandan and the former health minister K.K. Shailaja.

The species, belonging to the genus Impatiens (family Balsaminaceae), were spotted in the Western Ghats region of southern Kerala and the Idukki district during floristic surveys. Plants of this genus are popular as ‘Kashithumba’ in Malayalam.

New species are often named after individuals, but living politicians being honoured in this way is quite unusual. Contributions made by the individuals, and not political considerations, prompted the naming of two species after Mr. Achuthanandan and Ms. Shailaja, Dr. Anil Kumar told The Hindu. The former Chief Minister was honoured ”for his ardent efforts in the conservation of the pristine environment of Western Ghats, especially Mathikettan shola,” the PhytoKeys article said. A species has been named after Ms. Shailaja for her handling of the ”various epidemic and pandemic (COVID-19) situations in the state of Kerala through scientific temper.” Dr. Dan, meanwhile, has been honoured for his contributions to systematics and conservation of angiosperms in the Western Ghats.

Given their tiny populations, all three species can be classified as Critically Endangered (CE), applying the IUCN criteria, the research team said.

Found at an altitude of 1200 metres, Impatiens achudanandanii is a straggling, glabrous herb. Only three or four populations were found, and that too within a one-km area. The species faces threats from wild elephants and landslides. Impatiens danii is a 10-20 cm tall plant with a white flower which sports a yellow blotch on the throat. Impatiens shailajae belongs to the section Tuberosae, and was found along steep slippery cliffs in the deep forest.

The genus Impatiens is represented by more than 210 taxa in India. Over 106 species are endemic to the Western Ghats, of which 80% are endangered, the article said.