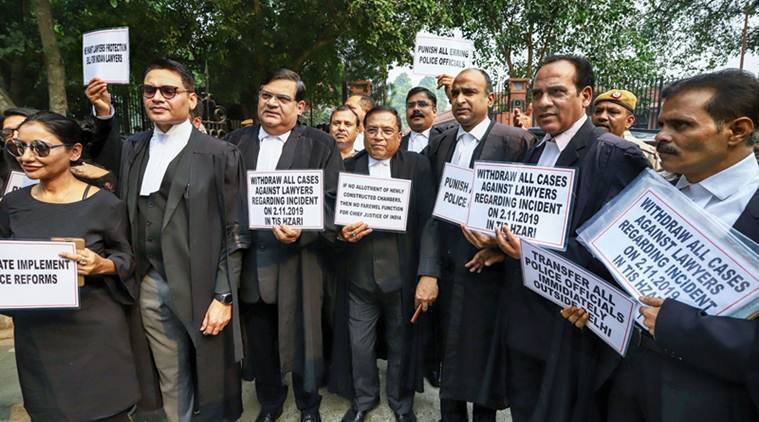 Bar Council’s move to frame rules to curb strikes by lawyers is long overdue. In a country with long pendency of cases, such strikes curtail people's fundamental rights. The Bar Council of India’s proposal to frame rules to curtail calls for strike by bar associations and advocates is a welcome move. The past few years have witnessed a rise in advocates striking work for myriad reasons. In 2019, lawyers in West Bengal struck work for a month in 2019 to protest against alleged excesses by the police during a clash between advocates and civic employees. Their counterparts in Uttar Pradesh went on strike demanding better working conditions and security for all lawyers following the killing of Uttar Pradesh Bar Council President Darvesh Yadav.

Madhya Pradesh lawyers demanded the enactment of the Advocate Protection Act in protest against the disapproval of the Bill by certain cabinet ministers. Advocates in Odisha suspended work following grant of bail to a prime accused in a cricket betting racket, while the Punjab and Haryana High Court witnessed a complete paralysis for one week with lawyers protesting against the setting up of a tribunal to deal with service-related matters of Haryana government employees. This state of affairs is disconcerting.

Should a civic society allow such indefinite strikes to take precedence over the fundamental rights of people? There are undertrials languishing in jails and litigants who have endured years in waiting for their case to be listed. In a judicial system where a grievous amount of pendency has impinged on the rights of individuals unwarranted strikes should not be condoned.

The Supreme Court of India in its landmark decision of Harish Uppal (Ex-Capt) v. Union of India had put a finality to the question of whether lawyers have a right to strike and/or give a call for boycott of courts and concluded that lawyers have no such right — even for a token strike. Protest, if any, can only be registered by giving press statements, TV interviews, carrying out of court premises banners and/or placards, wearing black or white or any colour armbands, peaceful marches outside and away from court premises, going on dharnas or relay fasts. The judgment empowered dissenting lawyers to boldly refuse to abide by any call for strike or boycott and stated that no lawyer can be visited with any adverse consequences by the Association or the Council and no threat or coercion of any nature including that of expulsion can be held out. The only exception carved out was in the rarest of rare cases where the dignity, integrity and independence of the Bar or the Bench are at stake. In such cases the courts may ignore an abstention from work, in protest, for not more than one day. This exception was also clarified to state that it is only for the Court to decide whether or not the issue involves dignity or integrity or independence of the Bar/Bench and a procedure was established before advocates decided to absent themselves from Court.

In 1922, a boycott of the Court by the pleaders of Habibganj against the arrest of Mahatma Gandhi qualified as misconduct under Section 13(b)(7) of the Legal Practitioner’s Act. The Court, in the words of Justice Sir Ashutosh Mukherjee in Emperor v. Rajni Kanta Bose and Ors, stated, “amongst other types of misconduct, there is none more reprehensible than such conduct as tends to impede, obstruct or prevent administration of justice or to destroy the confidence of the people in such administration and any attempt on part of the pleader to boycott the court or to obstruct administration of justice by any form of device constitutes in his opinion a ground for debar or suspension.”

Unbridled freedom of speech and expression has been held to be unconstitutional even by the United States Supreme Court in its 1989 decision of Federal Trade Commission v. Superior Court Trial Lawyers’ Assn. wherein the actions of a group of attorneys to boycott the courts was held to constitute restraint of trade. The Court observed that though the object was enactment of a favourable legislation, the boycott through which the Attorneys sought to obtain it was not protected by the Constitution’s First Amendment. Law School teaches the theory of Utilitarianism — “The greatest amount of good for the greatest number”. As one of the most powerful and persuasive approaches of normative ethics, an evaluation of incumbent actions of the advocates on strike, would testify to the fact that there is no “good” being derived from the current status quo. Rather, it dilutes the very essence of the profession, its members and the institution itself. Senior legal experts of the country have critiqued such actions. K K Venugopal, the current Attorney General of India in an National Law School Journal article in 1989, ‘The Legal Profession at the Turn of the Century,’ argued that boycott amounts to contempt of court and advocates participating in the strike keep their clients as hostages and their interests in jeopardy. H M Seervai contends that lawyers ought to know that at least as long as lawful redress is available to aggrieved lawyers, there is no justification for lawyers to join in an illegal conspiracy to commit a gross, criminal contempt of court, thereby striking at the heart of the liberty conferred on every person by our Constitution.

The Vakalatnama, which a lawyer holds from his client, constitutes the ethical, legal and moral responsibility a lawyer owes. The ‘Rules governing Advocates’ under the Advocates Act, 1961  provide that an advocate shall not withdraw from engagements once accepted, without sufficient cause and unless reasonable and sufficient notice is given to the client. The centralising power of Bar Associations to make unilateral decisions is an imminent threat to the institution. Such actions will reduce the Bar’s resilient and courageous mandates for redressing legitimate and genuine grievances, to acts without an audience. With a judiciary overburdened with pendency, the ultimate sufferers are the litigants.

The right to speedy trial, upheld by the Supreme Court in the Husnaira Khatoon case in 1979, becomes a travesty when lawyers strike work. Such actions go against the spirit of Article 39A and mar the reputation of the criminal justice system. It is imperative that the legal fraternity abjure such practices.