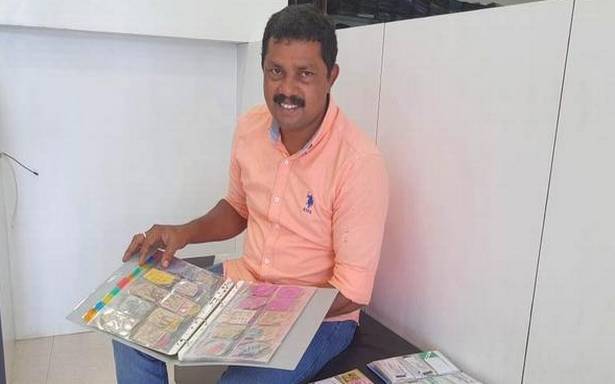 Hamza Mundummal, a 46-year-old trader from Perinthalmanna in Malappuram district in Kerala, has a unique hobby. He has created several albums with the tickets of all the films he watched from theatres.

From ₹2 to ₹130, the price range and the tickets Mr. Hamza has preserved will perhaps surprise the new generation cinema buffs. He has neatly kept over 1,100 of them in half a dozen albums, with the name of the movie and the date of watching written on each.

But Mr. Hamza is not really an ardent movie fan. He says he only used to go to theatres with friends on weekends. “It has been more of a social engagement for me. But I collected all the tickets of the movies I have seen since 1991. There are tickets collected until the lockdown brought closure of cinemas in Kerala due to the COVID-19 pandemic,” says Mr. Hamza.

The hobby of Mr. Hamza, who runs a roof tile shop named Kerala Store-K Roofe at Manjeri, evoked curiosity in his neighbourhood when his children shared the albums with their friends.

Changes over the years

“The biggest change I find in cinema tickets is in colour and size. Until a few years ago, cinema tickets used to bear peculiar colours and were small. But these days, larger, computer-generated tickets are not colourful and do not last much longer either as the print fades within days,” says Mr. Hamza.

He possesses tickets of movies that ran in theatres not only in Perinthalmanna, Kozhikode, and

Thrissur towns, but also in Gujarat, Karnataka, Tamil Nadu and the United Arab Emirates. “The UAE film ticket was the most expensive,” he said.

Several theatres that he has bought tickets from have become memories now. “It is sad to see the sites of some of the theatres that have since been demolished. Some have changed their names. An example is Alankar theatre at Perinthalmanna, which was renamed KC Movies and later Carnival Cinemas. Theatres Jahanara and Sangeeta remain memories in my album,” he says.