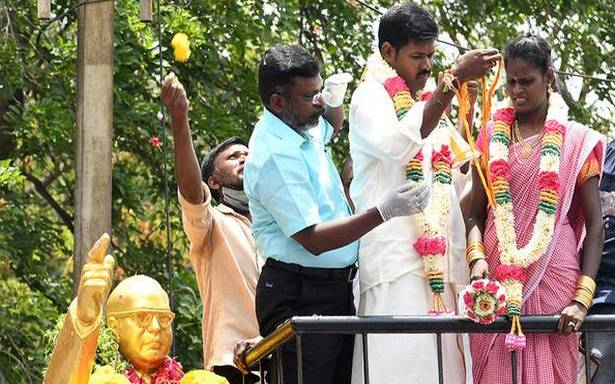 Sanatana political ideology is the biggest danger, he says

VCK leader Thol. Thirumavalavan on Wednesday sought a CBI probe into the recent murders of two Dalit youths in Arakkonam.

Addressing the media in Madurai, Mr. Thirumavalavan reiterated his allegation that caste discrimination and political reasons were behind the murders.

Contending that the biggest danger looming large over the nation was the “sanatana political ideology”, he said, “The sanatana forces are trying to impose one nation, one culture on the country.” Alleging that the BJP was targeting Tamil Nadu and Puducherry, he said it was time the entire nation was saved from sanatana forces.

Earlier, addressing party cadre after garlanding the statue of B.R. Ambedkar here, Mr. Thirumavalavan said the Canadian province of British Columbia had declared the birth anniversary of Dr. Ambedkar as Equality Day. “This proves that Dr. Ambedkar is seen as a symbol of equality and democracy.” Dr. Ambedkar’s concern for equality among the human race was reflected not only in his thoughts but also in his actions. The narrative of the campaign for the Assembly election, which was against the AIADMK, was turned against the BJP by the VCK, he added.