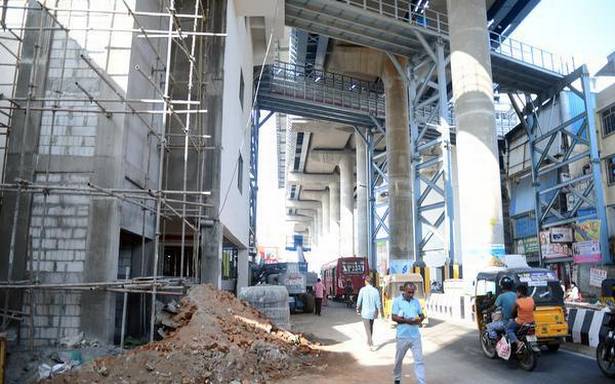 With no concourse level, passengers will buy ticket and board the train directly from the platform

Ten months after Prime Minister Narendra Modi opened the Phase I extension line of Metro Rail from Washermanpet to Wimco Nagar, the residents of Tiruvottiyur Theradi are unable to make use of the facility. They just watch trains pass through their locality without stopping and instead have to travel for nearly a km to the next station to board a train. This is because, even 10 months after the opening of the 9-km stretch, the construction of this station has not been completed.

According to sources in Chennai Metro Rail Ltd. (CMRL), the station — which is located between Kaladipet and Tiruvottiyur — may be opened next month. “The construction work is nearing completion. The contractor has to put up signage, finish some civil and some interior work. This can be completed within two or three weeks. But before that, the most important step is to send the station’s technical details and other parameters for approval from the Commissioner of Metro Rail Safety. As they do before the opening of every project, they will come down to Chennai to inspect the station to check if facilities required for passengers were available in this station. This is likely to happen by mid-January. The signalling software too has arrived and the testing too has been completed,” an official said.

Theradi Metro station has been designed in such a way as to have only the platform level unlike the other stations where both concourse level to buy tickets and a platform level are separately built; this had to be done owing to lack of land availability. So, a passenger who takes a staircase or lift will head directly to the platform level, like suburban stations, get a ticket and board in the same level. “But when there is a rush, like before a long weekend or holidays, it can be difficult for staff to handle the crowd in the same level. Instead, they could have an alternative to have ticket counter on the ground floor to use when the passenger traffic goes up,” a source said. This station will have a link bridge, akin to Little Mount Metro Rail station, for passengers to switch between two platforms.

Earlier, CMRL had stated that land acquisition issues delayed the completion of this station. Also, the design of this station had to be changed in such a way that the height of viaduct was increased to 17 metres to facilitate the annual temple chariot festival in the area.