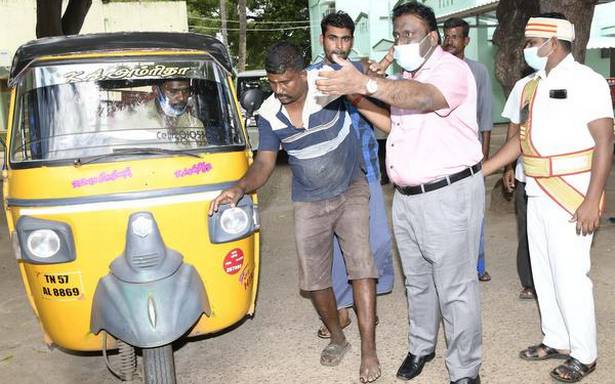 Theni Collector K. V. Muralidharan’s kind act on Saturday that saw him accompanying a road accident victim to the government hospital was appreciated by the villagers of Sillamarathupatti near Uthamapalayam.

The kind gesture of the top official in the district moved the accident victim so much that despite the pain he was suffering, he thanked the Collector profusely for being with him at the hour of crisis.

Officials said that Mr. Muralidharan was returning to Theni after inspecting the arrangements at Kumuli checkpost in view of the COVID-19 pandemic.

On seeing a crowd near a village, he stopped the car and stepped out to inquire. On realising that an accident had just occurred and the victim was waiting for the ambulance to come, the Collector waited for the vehicle to reach the spot.

After helping him get into the ambulance, he also went to Uthamapalayam GH to oversee the medical intervention. As the presence of the Collector at the hospital started spreading in the social media, encomiums started pouring in.

The Collector appealed to the motorists to follow road rules and wear helmets. Similarly, he also insisted four-wheeler users to wear seatbelts and avoid rash and negligent driving. Any death or injury may lead to sufferings for the family members and realising the consequences, the public should enforce self-discipline, Mr Muralidharan said.