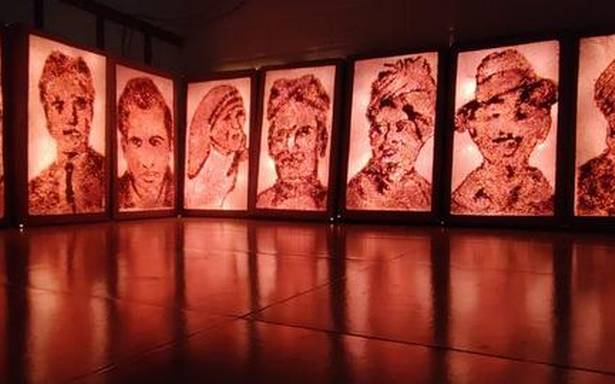 Art has the power to influence most people. But Sarandev S.S. combined it with his engineering skills and came up with a unique product. And what more, he has set quite a number of records with it.

Sarandev was passionate about art and fascinated by lighting right from his childhood. After completing Electrical and Electronics Engineering four years ago, he was determined to work in the electrical field and not follow the footsteps of his batchmates, who chose whatever job that came their way.

His wait earned results when he got his dream job, that of a lighting designer, first in Ernakulam and later in Kozhikode. It was during the lockdown last year, when he had enough time at hand, that the idea of doing something unique combining art and lighting hit him.

“I wanted to keep the project completely eco-friendly and also affordable. Thus I zeroed in on some cheap materials at hand. The egg shells were used to give depth to the image, as well as for the shadow effect. Coffee powder was used for colour,” Sarandev said. He had custom designed the cardboard boxes that were converted to light boxes using fairy lights, and the portraits done on ivory paper were pasted on them.

The records are just a stepping stone for this designer, who plans to one day create a unique lighting product combining his artistic skills with his passion for lighting. “I am at present experimenting with several mediums,” he said.

Sarandev, son of Sasikumar and Sreekumari, hails from Neyyattinkara in Thiruvananthapuram district and is working with a UK-based lighting company IHG Brands Light and Living in Kozhikode.