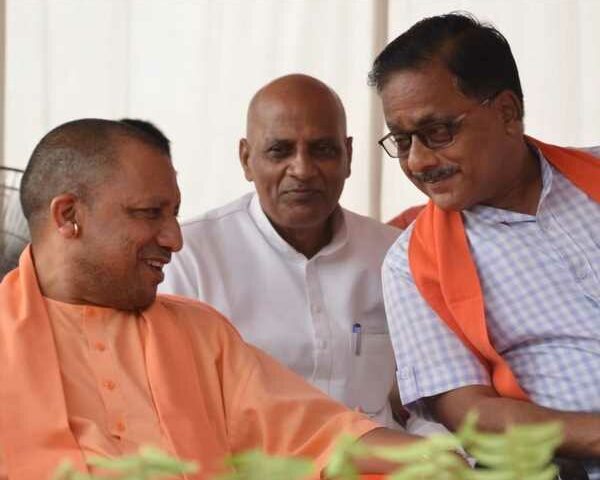 ‘If I had earned money as an MLA, I would have been sad to lose my seat.’
‘But I have not earned money. Instead, I have earned respect.’ When the assembly elections were held in the state early this year, he vacated his seat for Yogi Adityanath and canvassed for the chief minister, who won easily.

Now that he does not have an elected political post to concentrate on, he is devoting all his time to his patients at his clinic.

“They gave me the seat to contest when there were so many other applicants,” Dr Agarwal, who is a pediatrician, tells Rediff.com‘s A Ganesh Nadar. “So when the party asked me to vacate the seat, I did not hesitate.” Why did you sacrifice your seat for Yogi Adityanath?

It is not a sacrifice.

They gave me the seat for the past 20 years because I was capable. So many people had applied for the ticket but they gave it to me.

Now, when the party asked me not to contest, I did not hesitate. It is my duty as a party worker.

Did the chief minister make the request or did it come from Delhi?

I got the message from Delhi and also from local leaders; the party told me.

I campaigned so that the chief minister did not have to spend too much time here.

How is your relationship with Yogi Adityanath?

I have a very good relationship with him; that is why I immediately agreed to give up my seat when they asked me.

They did not have to persuade me.

I worked during the election as if I were contesting. Has the BJP leadership promised you a Rajya Sabha seat?

In the BJP, the cadre is important. From being in charge of 60 voters to being booth-in-charge to becoming an MLA and entering the assembly, we do all kinds of work.

Only some of us become an MLA; it is not a right.

You vacated your seat for the chief minister. Normally such candidates are given other important responsibilities by the party. How come this has not happened with you?

There is no hurry. They will give me responsibility when they want to.

I am a disciplined party worker. I have proved that.

Why didn’t you contest from another constituency?

I will do what my party tells me to do.

At present, I am a practising doctor. I treat patients.

You are a four-time MLA. How come you never became a minister?

Uttar Pradesh is a big state. Ministers are chosen from all parts of the state and all sections of society.

I was not chosen.

This time, Gorakhpur has a chief minister.

Who will become a minister is decided in Delhi. I cannot say that I am a four-time MLA so I should be made a minister.

You haven’t practised medicine since 2002. How will you keep in touch with the latest medical developments?

Though I spent most of my time in my work as MLA, I was always in touch with my practice.

I continued to attend medical conferences; I updated myself on the latest developments in paediatrics. What, do you think, made the people of Gorakhpur choose you as their representative four times?

I am a doctor. The doctor-patient relationship is one of trust.

When I won in 2002 for the first time, I took an oath to care for my constituency and I kept it.

I don’t indulge in goondagiri (violence) or encourage rowdyism.

I have a conscience and I listen to it.

I have never done anything. I never misused my position as an MLA.

I never took money from my people; you can ask anyone in my constituency and they will tell you the same thing.

I never move around in a group; I always go alone and I drive my own car. I don’t have attendants and I don’t have security.

I know 1/3rd of my voters by their first names.

I tell officials to work for the citizens.

If I had earned money as an MLA, I would have been sad to lose my seat. But I have not earned money. Instead, I have earned respect.

As I have time on my hands, I am practising medicine.

If the party gives me other responsibilities, I will fulfil them to the best of my ability. As a four-time MLA, you must be well known in your constituency. What do you do now when people approach you with their problems?

I listen to them. Then I make a few calls to help them. I never refuse to help.

If I cannot help, I refer them to an MLA who can.

For the common man, approaching the chief minister is not easy. Do you help people in your constituency connect with Yogi?

The chief minister is from here only. He has an office in his temple. I tell them to approach that office.

You are said to be close to the chief minister. What did he say when you started practising medicine again?

I did not tell him. I just started practising again.

Are you planning to contest elections again?

Fighting elections is not the only responsibility, other responsibilities are also there. The party will decide.

When I stood for elections, others worked for me. Likewise, I worked for Yogiji during these elections.

What are your future plans?

I am a party worker, not an MLA. I will continue to work for the people.

Now, I am working as a doctor. I write my prescriptions in Hindi.

I live my life honestly. I work with honestly.

Is your family happy that you are practising medicine and are not an MLA?

They are happy with whatever I do.

I was a normal person when I was an MLA. I did not enjoy any special status.

Now, I am a normal doctor who treats children.