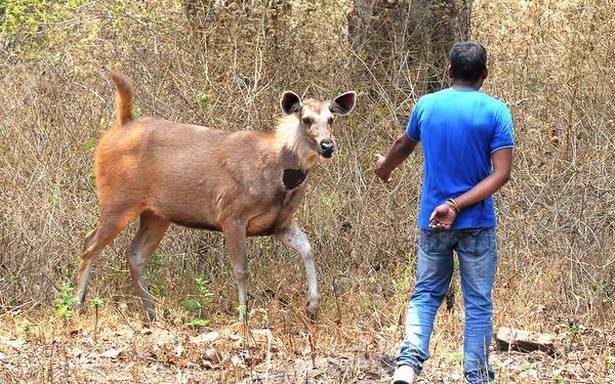 Journalist fined and let off with a warning

A television journalist from a national channel was penalized for feeding a deer while driving along the Bandipur Tiger Reserve.

The incident took place recently but the photograph of the individual feeding a spotted deer crossing the road went viral on social media and came to light on Tuesday.

Feeding of wild animals by tourists and motorists traversing through national parks and wildlife sanctuaries has become a menace and is rampant in Bandipur. This is because the tiger reserve is bisected by two national highways – one cutting across the forest to connect to Wayanad in Kerala and another to Mudumalai and Ooty in Tamil Nadu.

Given the popularity of Bandipur, Mudumalai, Ooty and Wayanad all of which are connected to Mysuru, the traffic is not only high, so are the incidents of people feeding herbivores. This was brazen in the old reception centre from where the safari used to commence. It was common to witness cliques of monkeys approaching tourists without fear and snatch a bite. But the safari point has now been shifted to Melkamanahalli and the cliques which were habituated to snacks from tourists can be found along the highway.

Wildlife activists have cautioned time and again that such practices – of feeding wild animals – was fraught with danger for animals as they tend to loose their fear of human beings. In the process such animals become more susceptible to be trapped and poached.

The animals can also venture into human landscape and could be trailed by carnivores and this could escalate human-animal conflict, according to the wildlife activists. This apart, if the animals become habituated to being fed by humans, their instinct to forage for fodder in the wild and survive through tough times could be lost over a period of time. In addition, tourists on the move tend to chomp on salty and deep fried delicacies which could be injurious to animals health, according to the activists who have cautioned against feeding wildlife.