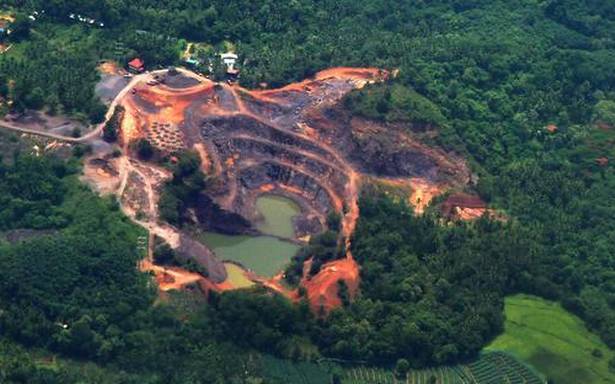 Why are Wayanad district’s construction projects facing delays? How are environmentalists reacting to the granite shortage?

The story so far: While the Kerala government is pressing ahead with ambitious projects like the SilverLine semi-high speed railway line, almost every district in the State is, ironically, facing a dire shortage of construction material, granite in particular, owing to curbs in quarrying on account of ecological concerns and in the wake of public protests.

The frugal supply of granite has put the brakes on all major constructions including the Vizhinjam Port Project. Local non-availability of granite and red earth has also pushed up construction costs across the State, more so in districts like Wayanad where a ban on quarrying in revenue land has been in force for some time now.

The struggle for a balance between ecological considerations and physical infrastructure development is real and more pronounced in the hill districts of Kerala.

Has the construction sector hit a stone wall in Wayanad?

All types of construction – from private residences to houses for tribals under various schemes, house construction for the homeless under the LIFE (Livelihood Inclusion and Financial Empowerment) Mission, building of roads and bridges and irrigation canal projects – have been hit by the sparse availability of granite in the district.

Since it is transported from quarries in the nearby Kozhikode, Kannur and Malappuram districts, the prices have gone up, causing public resentment over the cost escalation.

What happened after quarrying in revenue land was banned?

Unrestricted granite-mining, quarrying and stone-crushing at three tourism sites in the biodiversity hotspots of Ambalavayal and Krishnagiri villages in the district were banned about six years ago. These areas were thought to be at a high risk of landslides, forcing the ban. There were about 150 granite quarrying units in these areas prior to the ban. “The price of granite has increased manifold ever since they were shut down,” says O.V. Varghese, Chairman, Wayanad Natural Resources Consumer Protection Forum.

Only half a dozen quarries are functional in the district right now. And they reportedly charge the same price as the stones ferried from the nearby districts. People like C. Abdul Razakh, secretary of the Nilgiri-Wayanad NH and Railway Action Committee, argue that transporting granite to Wayanad in hundreds of mutli-axle trucks daily along the fragile and narrow Ghat road to the district poses its share of environmental, economic and mobility problems. “It often disrupts emergency ambulance traffic to speciality hospitals in Kozhikode,” he says.

Some say that a solution lies in implementing the proposed Nilambur –Nanjangud railway line.

Is there a way to break this logjam?

N. Badusha, president of Wayanad Prakruthi Samrakshana Samiti [Wayanad Nature Conservation Forum] says that environmentalists are only opposed to quarrying in ecologically fragile areas. “We are not opposed to quarrying in other areas for the development needs of the people. But such mining units should be directly managed by the local bodies, not by private individuals,” he says. Meanwhile, using alternative construction material should be explored.

Is the situation better in other districts?

Ali Moideen, president of All Kerala Crusher Owners’ Association, maintains that granite for constructions in Thiruvananthapuram, Kollam and Pathanamthitta districts in south Kerala is sourced from Tamil Nadu. “All major works are making a slow progress and small contractors are in a crisis thanks to this,” he says. Varghese Kannampilly, president of Kerala Government Contractors’ Association, says that while the government closed down about 4,000 small and medium quarries, the much bigger ones with owners linked to political honchos are functioning. “But that’s insufficient to meet the huge demand,” he says. “The government, however, doesn’t take into consideration any of these aspects while inviting tender for projects which more often than not end in higher costs, inferior quality of work and inexorable delays,” he says.