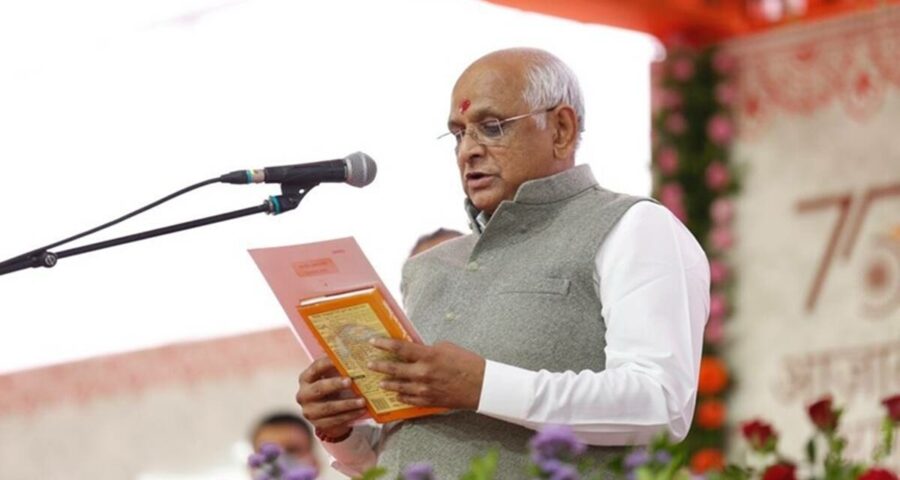 The sudden change in Gujarat’s politics, brought about by the appointment of Bhupendra Patel as the state’s CM, is reminiscent of the political scientist Rob Jenkins’s term for India’s economic liberalisation process — “reform by stealth”. This ministerial formation indicates the centralisation of power in the BJP that has left senior leaders furious and upset. However, this “governance by stealth” approach, with a largely inexperienced ministry, does little to control the damage done to BJP’s image due to the mismanagement of the state’s public health system during the second wave of the Covid-19 pandemic. More importantly, with the state election scheduled in late 2022, it neither takes care of electoral arithmetic nor addresses the socio-economic problems in the region.

To begin with, the party has reinforced the status quo in terms of caste. From the mid-1990s, when the BJP came to power in Gujarat, the dominant castes — Patels, Brahmins, Banias, and Rajputs — with less than 30 per cent share in the state’s population have held at least two-thirds of the cabinet portfolios. According to the Ashoka University-Sciences Po SPINPER dataset, in the minister of state positions, their share has remained between 43 and 67 per cent. In the 1990s, most CMs were Patels, and despite the removal of one of their own, Keshubhai Patel, from the post of CM, the Patels continued to occupy at least 30 per cent of the cabinet portfolios in the 2000s and 2010s. This time, too, 60 per cent of the cabinet ministers are from the dominant castes. The powerful ministries are with the dominant castes. For example, two Brahmin ministers are in charge of finance, revenue, energy and petrochemical departments, whereas a Bania-Jain and Patels (including the CM) control the influential security portfolios (like home), agriculture, industries, mines and minerals, ports, Narmada, and education, to name a few. Barring one OBC minister, all OBC-SC-ST ministers have been allotted departments with low budgets such as social justice and rights, welfare of SC/ST and women.

The status quo may not revive the BJP’s waning appeal amongst Patels, a committed core group of BJP voters that has begun to shift to the Congress in rural areas and, of late, to the Aam Aadmi Party in the urban, lower-middle-class peripheries. Their approach to viewing the Patel problem purely from the lens of representation is faulty. This group has always had more MLAs and ministers than their population share. Even at their lowest in 1985, they contributed 17 per cent of Gujarat’s legislators, a few percentage points higher than their population estimated at 12 per cent in the last caste census of 1931. Patels have contributed at least one-quarter of the party’s MLAs, sometimes reaching as high as one-third, since the 1990s. Just before the Patel movement for their inclusion in the OBC quota found articulation, the community’s representation peaked with 51 MLAs in the state after the 2012 election.

The Patel conundrum — a problem that afflicts the larger rural side of Gujarat and other states — is symptomatic of dwindling incomes and youth unemployment. In their paper on peasant society in Gujarat, anthropologists Alice Tilche and Edward Simpson argue that “the hierarchy [in rural Gujarat’s marriage market] once ordered by land and agricultural adroitness has been replaced by a league of nations [through migration to places like US, UK, Canada] and graded shades of white collars.” On this crucial socio-economic front, not only does the BJP fail to enact concrete policies but its representation argument too is flawed: The party has come to like a certain kind of Patel, the one who is urban and industrialist. The appointment of Bhupendra Patel, a real estate businessperson who headed the two most influential urban bodies of Gujarat (Ahmedabad Municipal Corporation and the city’s urban development authority), as CM merely confirms the capture of the Gujarati state by urban elites.

Indeed, this “governance by stealth” approach instead of weakening the Opposition might provide them with an opportunity to organise the deprived castes and classes in rural areas through a narrative on Gujarat’s faltering socio-economic record. This strategy proved beneficial to the Congress and its allies in the 2017 assembly election: They won 59 of the state’s rural constituencies that have less than 25 per cent urban areas — a strike rate of over 65 per cent. But, in semi-urban and urban seats, this strike rate was under 25 per cent where the opposition alliance won just 22 of the 91 seats. However, a division of labour on rural-urban lines between the Congress and AAP might remedy these dramatically contrasting electoral prospects, as AAP has gained some appeal amongst qualified but underpaid youths in Gujarati cities, especially Surat.

But to go by the signals from the outgoing senior ministers, the BJP will concentrate on the agenda of Hindu supremacy for the 2022 election, without addressing the state’s poor socio-economic track record. In the last few years, the party has strengthened laws that make interfaith marriages and property sale between Hindus and Muslims in urban Gujarat nearly impossible (although the new amendments to these laws have been stayed by the High Court). For example, the outgoing deputy CM, Nitin Patel, remarked that “this country’s laws, Constitution are secure only until Hindus are in a majority.” Just a day before his resignation, former CM Vijay Rupani listed “the law to save cows from slaughter” and “stop love jihad” as his government’s achievements, after earlier having promised to contest the HC stay on the anti-conversion law in the Supreme Court. Can the BJP rely on identity politics and ignore socio-economic issues again in 2022?

This column first appeared in the print edition on September 29, 2021 under the title ‘BJP’s Patel conundrum’. Laliwala is an independent scholar on politics and history of Gujarat; Jaffrelot is senior research fellow at CERI-Sciences Po/CNRS, Paris, and professor of Indian Politics and Sociology at King’s India Institute, London