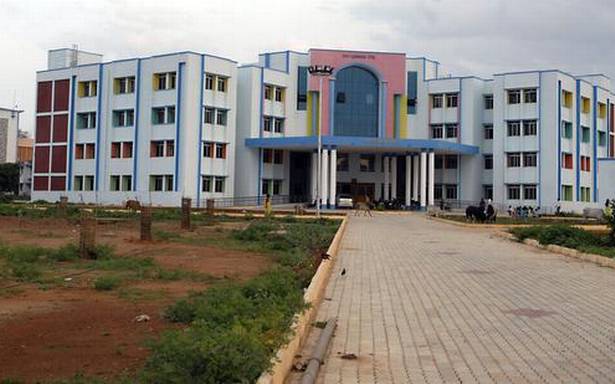 The authorities in Tiruchi and Thanjavur districts, where an upward trend in COVID-19 cases is being reported, are preparing for a spike. The officials have begun strengthening the infrastructure to tackle the increase, should it get worse.

In Thanjavur, which has been identified as a district with a high percentage of increase in cases in the State over the last few weeks, steps are being taken to increase bed capacity and ensure availability of medical oxygen. Thanjavur Medical College Hospital and the Government Raja Mirasudhar Hospital will together have 2,500 beds in the COVID-19 wing. While 626 beds were demarcated in 2019, the number was increased to 1,303 during the second wave.

Explaining the increase in bed capacity, G. Ravikumar, Dean, TMCH, said that 1,744 of the 2,500 beds would be oxygen-supported. Of them, 620 are in Raja Mirasudhar GH, including 80 with oxygen support, allocated in the paediatrics ward. An ICU had also been created with a 400-bed capacity, he said.

While TMCH had two 10 KL liquid oxygen plants and the Raja Mirasudhar GH had one, they have further scaled up its oxygen availability. A 1,000-litre Pressure swing adsorption (PSA) oxygen generating plant, funded through PM CARES, had been installed at the TMCH. A 500-litre PSA plant and two 250-litre ones, sponsored by donors, had also been installed.

Dr. Ravikumar said that the hospital had sufficient stock of drugs, including the ones to treat mucormycosis. So far 143 patients had been treated for the infection, he said.

Following the addition of another RNA extractor, the COVID-19 testing facility would be able to process up to 4,800 test samples a day, he added.

In Tiruchi too, similar efforts were being made. A 1,000-litre PSA plant funded through the PM CARES would soon be installed to provide oxygen supply for the 600-bed Super Speciality wing. Two 350-litre plants had already been installed – one dedicated to the paediatrics ward. A 30-bed triage centre and additional ventilators were all being added, official sources said.

Dean K. Vanitha said that adequate manpower was also available. “A total of 75 staff nurses, 40 doctors and 15 lab technicians, who were appointed during the peak of the second wave, have been asked to continue their service,” she said.

The total testing capacity in Tiruchi is also being scaled up. Soon, up to 6,000 samples can be processed in a day. “We expect to provide test results within 24 hours to all those who take the test,” a senior official said.