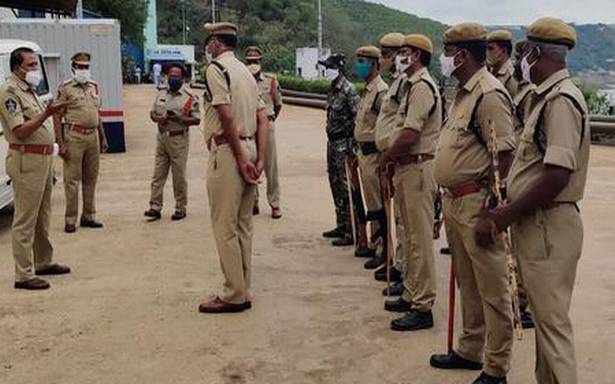 Tension continued to prevail at Srisailam and Nagarjuna Sagar (NSP) projects as efforts by the Andhra Pradesh government to stop Telangana from drawing water for power generation met with little success on Friday.

Officials on both sides engaged themselves in a dialogue, but the deadlock remained as the Prime Minister’s intervention sought by the Chief Minister has not come yet. The two projects had a large number of police personnel deployed to meet any contingency.

The Srisailam project, which is the major bone of contention, is under close surveillance and so is the Rajolibanda diversion scheme in Kurnool district at the tri-State junction of Andhra Pradesh, Karnataka and Telangana.

Meanwhile, Andhra Pradesh government adviser Sajjala Ramakrishna Reddy told mediapersons that there might be no need for the Central government to take over the maintenance of the projects, expressing hope that the standoff would end sooner than later with its intervention.

The full reservoir level was not likely to last for more than 15 days, in which time Andhra Pradesh had to utilise the water to meet its irrigation requirements.

Mr. Ramakrishna Reddy recalled Telangana Chief Minister K. Chandrasekhar Rao’s promise to settle the dispute over water releases to Rayalaseema as a “big brother”, and said it appeared to be forgotten or deliberately ignored.

Anantapur Special Correspondent reports: The number of police personnel deployed at the Rajolibanda Diversion Scheme Right Canal worksite at the tri-State junction and at the Srisailam Reservoir in Kurnool district was increased on Friday.

Kurnool Superintendent of Police Fakkeerappa Kaginelli told The Hindu that the situation was under control at both the sites with 45 personnel deployed at the Srisailam Dam site and 40 at the RDS.