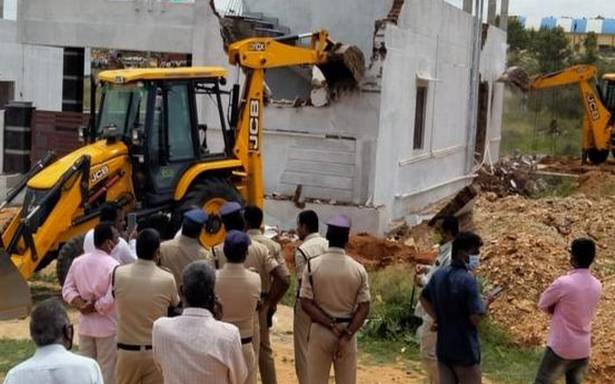 Tension gripped Piler and surrounding areas on Saturday as the revenue officials escorted by a heavy police force began pulling down illegal constructions that came up in government lands.

On the instructions from Sub-Collector (Madanapalle) Jahnavi, the revenue authorities in Piler commenced the exercise in the early hours, reportedly giving little time for the inmates to vacate the premises. The drive was more focused on the structures which came up along the Piler-Tirupati road.

Expecting public protests, the authorities had drafted a huge police force from all over Madanapalle division and posted them at all vulnerable areas in and around Piler.

The latest development is seen as a backlash of political allegations that the ruling YSR Congress Party leaders had resorted to large-scale encroachment of government lands in Piler, Madanapalle and several prime areas as far as Anantapur district border, worth over ₹500 crore.

Senior TDP leader N. Kishore Kumar Reddy was at the forefront to make the allegations, besides issuing a warning that he would resort to legal recourse to protect the government lands. The controversy had even dragged names of a Minister and an MP in the district.

A police officer said that removal of encroachments in government lands would be continued till the process is fully completed.