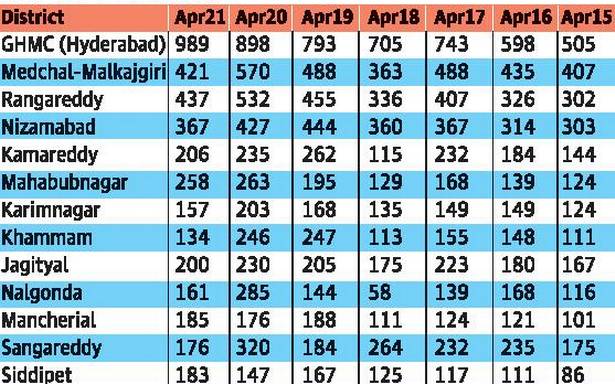 As the surge in COVID cases continues unabated in Telangana and elsewhere in the country, the State has recorded the highest number of deaths on a single day till date during the second wave till 8 p.m. on April 21 (Wednesday). A total of 23 deaths were reported during the period.

According to the bulletin issued by the Directorate of Public Health on Thursday on the status of COVID in the State till Wednesday, the total deaths reported in the State so far has gone up to 1,899 with the government attributing 44.31% fatalities to purely COVID symptoms and 55.69% to co-morbidities of the infected.

Hyderabad and its surrounding areas continue to remain the hotbed of COVID spread in the State as 989 positive cases were reported from GHMC area on Wednesday, followed by 437 in Rangareddy, 421 in Medchal-Malkajgiri and 367 in Nizamabad. Only Wanaparthy, Narayanpet, Jogulamba-Gadwal, Mulugu, Kumram Bheem-Asifabad, Jayashankar-Bhupalapally reported less than 50 cases each.

The remaining 23 districts reported cases in the range of 72 to 258 with 17 of them reporting over 100 cases each. The State government (DPH) has stopped giving the break-up of positive cases staying in institutional and home isolation and hospitalisation for the last couple of days. It has also stopped giving hospital-wise bed position (availability) in the regular, oxygen and ICU categories and instead released a web link https://health.telangana.gov.in/ for real-time information on hospital bed status.

According to the bulletin, based on active cases, the government has declared 495 localities in the State as micro containment zones with a maximum number of 70 in Hyderabad followed by 66 in Nizamabad, 32 each in Nirmal and Medchal, 29 in Vikarabad and 25 in Khammam.