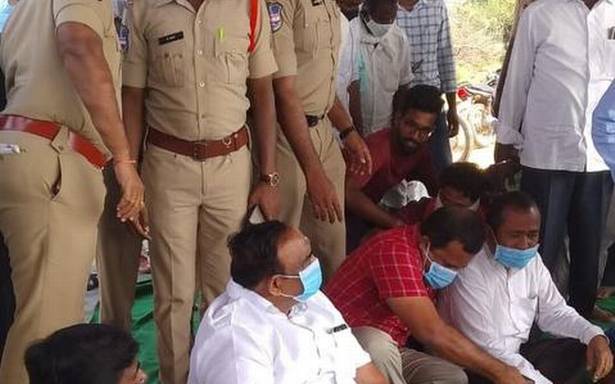 Dissatisfied with his replies, they raise slogans against Husnabad MLA Satish Kumar

The efforts made by Husnabad MLA V. Satish Kumar to pacify the agitating oustees of Gudatipally, the submerging village under Gouravelli reservoir, were not successful. He had a bitter experience with oustees raising slogans against him.

Mr. Satish Kumar visited the protest camp of the oustees at Gudatipally on Tuesday and interacted with them. He urged them to withdraw the agitation and cooperate with the government for the construction of the Gouravelli reservoir.

He promised to fulfil all the promises made to them. However, he did not have an answer when the oustees asked him for a time frame for the assurances to be addressed. The visiting MLA told the oustees that he had to talk with the government on the assurances and added that it was not possible to immediately implement all the promises made to them.

The oustees pointed out that when the project works are under progress for the last one-and-a-half decade or so where was the urgency to complete it without paying the right compensation to the the project displaced. They also questioned him about the delay in issuance of GO pertaining to compensation to the youth aged above 18 years and the promise of double bedroom houses.

“It appears that the MLA came here as leaders of all other political parties are visiting the protest camp. We did not find him showing any interest in addressing our problems as he was repeatedly saying that only the government has to take a decision. Why we are being discriminated against when similar benefits were extended to oustees of other irrigation projects in the district?” asked an oustee on condition of anonymity stating that the MLA was at the protest camp for hardly 15 minutes.