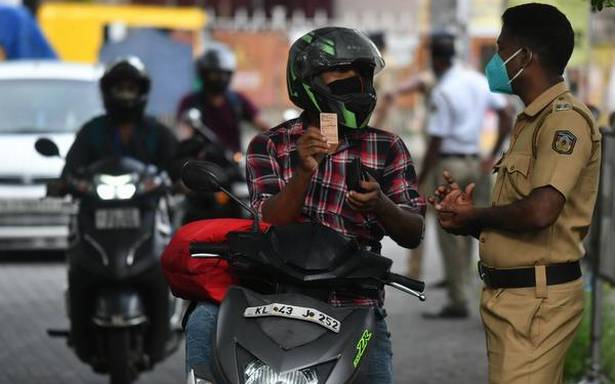 Besides rigorous COVID-19 and law- enforcement duties, delay in post-poll transfers vex them

As reports of a brutal attack on a police officer at Marayur in Idukki district while enforcing the COVID-19 protocol came out on the morning of June 1, the incident momentarily threatened to be the last straw for an already stretched force that has been in the front line of the fight against the pandemic.

Ajeesh Paul, a 38-year-old civil police officer, sustained fractures on the skull as a person who was stopped for not wearing a mask threw stones at the officer. Mr. Paul was rushed to a private hospital in Kochi where he had to be put on ventilator support, till his condition improved.

“While the incident was extremely demoralising, the speed with which the State government reacted and decided to foot his entire treatment expenses reassured the police force that they will be taken care of if something were to happen to them,” said P.D. Baiju, president, Kerala Police Association, Kochi City. The injured police officer was also allocated ₹3 lakh from the Police Welfare Bureau.

However, the police personnel remain far from an ideal physical and mental state owing to the rigorous COVID-19 duties and law-and-order enforcement. During the first wave last year, the force could focus solely on pandemic-related duties as there was a steep fall in crime rate, which is no longer the case.

The delay in transferring personnel back after the elections remains another grouse. The post-election reshuffle has not happened yet on account of the raging second wave of the pandemic.

“Though the delay affects everyone, officers promoted as sub-inspectors towards the fag end of their careers suffer more, being away from their families during a health crisis,” said an association office-bearer.

The saving grace is that despite being on the front line, the rate of serious infections has drastically dropped among the personnel in the second wave, thanks probably to their priority vaccination. “However, it is important that our families are also vaccinated at the earliest since we can still be carriers,” said another officer.