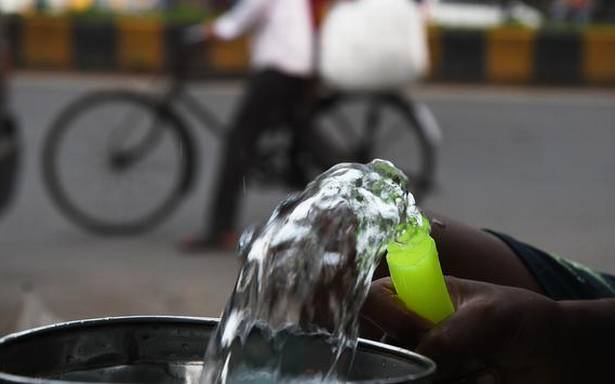 Only 5% of the funding behind Bihar’s success in providing tap water connections to 87% of its rural households came from the Centre’s flagship Jal Jeevan Mission (JJM), the State’s Water Resources Minister Sanjay Kumar Jha said on Wednesday. Over 93% of funds came from a State scheme. However, Union Jal Shakti Minister Gajendra Singh Shekhawat earlier told The Hindu that Bihar had taken decentralisation under the scheme to an extreme, resulting in quality issues that needed correction.

The tussle for credit by the Janata Dal (United)-ruled Bihar government, challenging the narrative of the BJP-ruled Centre, comes during the two-year anniversary of the flagship scheme which aims to bring tap water connections to all rural homes across the country by 2024.

Since its launch on the Independence Day 2019, the JJM has claimed that it has provided taps to 4.73 crore households, including 1.46 crore in Bihar. In the run up to assembly elections last year, the State’s performance was hailed as one of the success stories of the scheme, and it has now achieved 87% coverage, in contrast to the national coverage of 41%. It stands at the fourth position among States, following Goa, Telangana and Haryana.

In a series of tweets on Wednesday, Bihar’s Water Resources Minister said it was the State’s Har Ghar Nal Ka Jal scheme, launched in September 2016, which was responsible for this success. He pointed out that out of 1.15 lakh rural wards, Bihar has done work under JJM in 4,891 wards, while 1,346 wards were taken up under JJM’s predecessor at the Central level, the National Rural Drinking Water supply Program launched in the UPA era.

The remaining 1,08 lakh wards were covered under the state government’s scheme, he said.

It was a similar story when it came to funding, with JJM accounting for ₹8.44 lakh and NRDWP for ₹2.32 lakh, while the bulk funding of ₹152.16 lakh came from the State scheme, according to Mr. Jha.

In response to a query from The Hindu on Tuesday, Union Minister Mr. Shekhawat agreed that Bihar’s high coverage levels had come from its own scheme, but warned of compromises in quality. “Bihar had started the work earlier, even before this scheme was launched. But they have over decentralised the work,” he said.

“Because of this, there have been some quality related issues, and sustainability issues. So then we had to go back and retrospect and re-augment and that has taken time. So now, the State has reached more than 80% coverage and I am confident that it will attain 100% coverage within the current [financial] year,” he said.

A senior Jal Shakti official said the Bihar government had been unwilling to accept Central funds or advice. Another senior official pointed out that the JJM had been structured to take advantage of synergies in funding from multiple sources, including Central, State and local governments, non-profits and international intergovernmental organisations, and private players. He said the Bihar Minister’s emphasis on state funding was only intended to stoke political controversy.

Apart from Bihar, Haryana and Gujarat are set to achieve 100% coverage this financial year, likely by December itself, said Mr. Shekhawat. He noted that despite the challenges of COVID-19 lockdowns, the scheme was running ahead of schedule. He expressed confidence that the target of 54% coverage by March 2022 would be achieved.