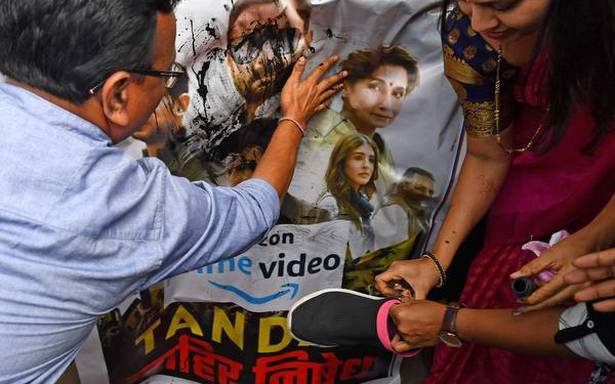 The four-member team is likely to record statements of the makers and cast and crew of the Amazon Prime Video’s series.

A four-member team of Uttar Pradesh Police arrived in Mumbai on Wednesday to conduct a probe into a case registered in Lucknow against controversial web series Tandav, an official said on Wednesday.

The U.P. Police team is likely to record statements of the makers and cast and crew of the Amazon Prime Video’s series, which has been accused of hurting religious sentiments for its depiction of Hindu deities.

The U.P. Police personnel reached Mumbai in the morning and visited the office of Deputy Commissioner of Police (Detection-1) in suburban Andheri for assistance, the official said.

Two members of the U.P. Police team also visited the Mumbai Police headquarters in south Mumbai in the afternoon.

While at the Mumbai Police headquarters, the U.P. Police personnel said they are getting cooperation from their counterparts here and "there is no issue about it".

"We had come to meet police officers at the headquarters, we are not authorised to speak," an official from the U.P. Police team said.

On Monday, U.P. Chief Minister Yogi Adityanath’s media advisor Shalabhmani Tripathi said the makers of Tandav will have to pay the price for hurting religious sentiments.

He said four members of the U.P. police have left for Mumbai for a detailed probe into the case, after an FIR was lodged against the show at the Hazratganj police station.

"U.P. Police has left for Mumbai, that too in a car. There are strong sections in the FIR, remain prepared, will have to pay a price for hurting religious sentiments," Mr. Tripathi said in his tweet.

At least three FIRs have been lodged against the makers and artists of Tandav in Uttar Pradesh – at Lucknow, Greater Noida and Shahjahanpur – for alleged inappropriate depiction of U.P. Police personnel, deities, and adverse portrayal of a character playing Prime Minister in the show.

At the centre of the row is a scene with Zeeshan Ayyub, in the role of college student Shiva, playing the Hindu god Mahadev in a theatre production.

As the controversy escalated, the show makers on Tuesday tried to defuse the situation by announcing their decision to remove the controversial portion from the show.

The cast and crew of the show on Tuesday also said they had decided to implement changes to "address concerns".

In their second apology statement in two days, the show’s team also thanked the Ministry of Information and Broadcasting for its "guidance & support" in the matter.