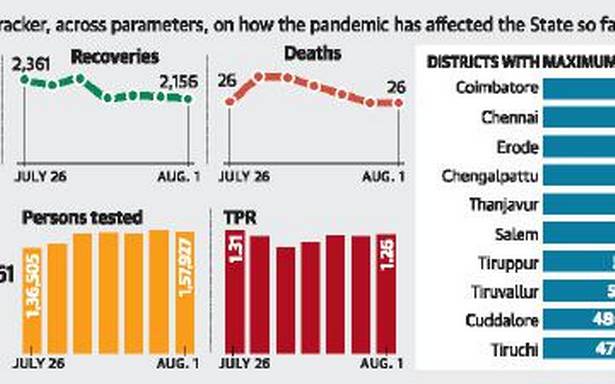 The number of COVID-19 cases getting reported daily in Tamil Nadu witnessed an increase for the fifth consecutive day on Sunday with 1,990 fresh infections.

Tiruppur and Erode were the top two districts that saw the highest increase in the number of cases compared to Saturday.

Coimbatore, however, reported the highest of 230 cases, followed by Erode (180) and Chennai (175). Chengalpattu (133) and Thanjavur (126) were the other two districts that reported more than 100 new cases on Sunday.

Another seven districts, including Tiruppur (95) and Tiruvallur (95), reported more than 50 cases. Perambalur (8) was the only district where the new cases were in the single digit.

The total number of deaths increased to 34,102. Of the 26 deaths reported on Sunday, Tiruppur had the highest fatality of five, followed by four in Salem and three in Namakkal. Chengalpattu and Tiruchi reported two deaths each. Another 10 districts, including Coimbatore, reported one death each. Chennai and 22 other districts reported no fatalities.

Among the deceased persons, 22 people had comorbidities. The test positivity rate went up further marginally from 1.2% on Saturday to 1.3%. The number of persons tested in the 24-hour period ending on Sunday was 1,57,927.