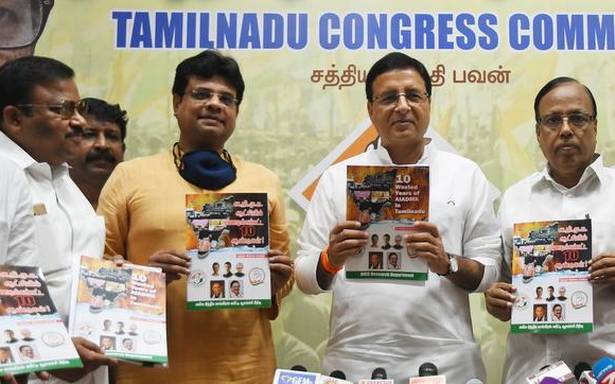 Accusing the AIADMK of being a ‘puppet government, which is just an extension of the Modi government’, he termed the AIADMK as being a mere ‘Modi toolkit’

The DMK-led alliance in Tamil Nadu will ensure that a fair probe is held against Chief Minister Edappadi K. Palaniswami and his ministers on allegations of wrongdoing and corruption, once the alliance comes to power, Congress general secretary Randeep Singh Surjewala said on Wednesday.

At a press conference in Chennai, Mr. Surjewala listed out 10 questions for the AIADMK-led alliance “on the all-pervading mite of corruption which has eaten up the very edifice of governance in Tamil Nadu”.

Accusing the AIADMK of being a “puppet government, which is just an extension of the Modi government”, he termed the AIADMK as being a mere “Modi toolkit”.

Mr. Surjewala questioned why Mr. Palaniswami has not replied to the charges of irregularities against him in the awarding of road contracts or agreed for a judicial probe. Besides, he asked why no independent probe was ordered against Health Minister C. Vijayabhaskar in the gutka scam or against Municipal Administration Minister S.P. Velumani.

He questioned why no action has been taken in the “Cognizant scam” and why no probe was ordered to find out which politicians and officials had taken bribes, why the prices of LEDs had been inflated and bought at higher prices, and purchase of electricity from a company at higher prices has not been probed.

Mr. Surjewala accused the AIADMK government of virtually shutting down the Directorate of Vigilance and Anti Corruption and systematically paralysing the institution.

“Those who have caused a loss to the public exchequer must be probed, investigated and punished, that too in a time-bound manner. The Congress party is committed to push for this and so is the DMK. We will together ensure without any political interference, a free and fair probe is held against the conduct and wrong doings of the CM, his ministers and officers and those who are found guilty of duping and deceiving the public,” he said.