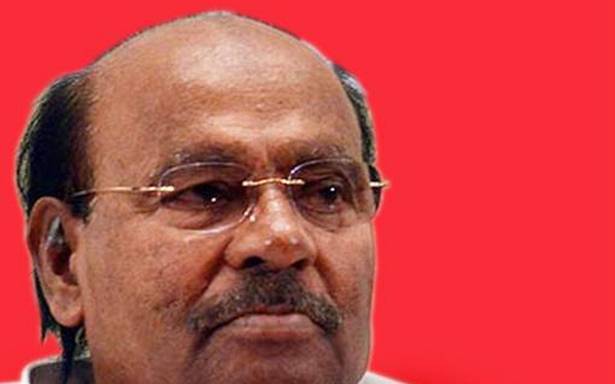 One of Tamil Nadu’s senior political leaders and PMK founder S. Ramadoss in an interview insists that exclusive reservation for Vanniyars will not lead to consolidation of other MBC communities. He believes that the people will ensure that the DMK does not return to power. Edited excerpts:

The AIADMK-PMK alliance faced a rout, attributed to the anti-Modi wave, in 2019. With rising fuel and LPG prices, what do you think will give your alliance a huge victory?

There is no denying that rising petrol, diesel and cooking gas prices will affect our people. The PMK always has always insisted on reduction of taxes on fuels to safeguard the people. It is only a temporary phenomenon as oil-producing countries have decided to increase the production of crude oil; gradually, fuel prices will come down.

Besides, these come under the Centre’s domain. The people are well aware that the forthcoming election is for the Tamil Nadu Assembly. The AIADMK has announced the provisioning of six free LPG cylinders, annually, to every household, and this will reduce the people’s burden to a great extent.

Beyond all this, people are well aware about the harm if the DMK returns to power. Therefore, the rise in fuel prices will not have a huge impact. At the same time, the promised financial assistance of ₹1,500 a month will garner more votes.

You placed a 10-point demand in 2019 before joining the AIADMK alliance. But now you have placed only the Vanniyar reservation demand…

Separate reservation for the Vanniyar community is not a new demand. The need for the conduct of a caste-based census in Tamil Nadu was one of our primary demands in 2019.

Five of 10 demands put forth by the PMK in 2019 have been fulfilled. The party will continue to insist that the rest be fulfilled as well.

There is a view that the 10.5% reservation will lead to a consolidation of non-Vanniyars in MBC, against the AIADMK and the PMK…

According to the Ambasankar and Janardhanan Commissions, the population of Vanniyars is 13.6%. The population of other MBCs is 7.2%. Only 10.5% reservation is provided for 13.6% of Vanniyars, whereas the remaining 7.2% of MBCs are provided with 9.5% reservation. Hence, there is no negative impact on them. Therefore, it is wrong to state that other MBCs are rallying against the AIADMK and the PMK. No one has objected to this. Even the protests [which he described as a “single-digit crowd”] held in the southern districts were provoked by some parties.

Are you not running the risk of being labelled a Vanniyar party, limiting your political growth?

Please read our manifesto. We are demanding a caste census. If Brahmins are 3% of the population, give them 3% representation. In Kerala, reservation is divided into eight compartments on the basis of castes, not a cluster of castes. The Ezhavas alone have been given 14% reservation. Similarly, the Nadars, Vishwakarmas, Latin Christians… have been given reservation separately. We are saying the same.

First take the caste census. It was last done in 1931 by the British. A census for SC/STs is done every 10 years.

Vanniyars will constitute around 15% of the population. We have achieved 10.5% reservation as a first step. If a coconut must be divided among 100 people, it should be broken into 100 pieces. We want everyone to study, get jobs and have good health.

The PMK disagreed with the NPR, the CAA and the NRC. Your MP Anbumani in 2019 said PMK would change the policies of the AIADMK and the BJP from within. Have you had a conversation with the BJP leadership regarding the issue?

We do not agree with the NPR, the CAA and the NRC. We have made this clear both in party resolutions and in our election manifesto. The AIADMK’s stand on the issue has changed to an extent, and the State has written to the Centre, requesting for an announcement that controversial questions will be avoided in the process of preparing the NPR. We also strongly believe that the Centre’s stand on the issue will change.

With the State’s taxation revenues falling and debt increasing, do you think the State can afford to implement liquor prohibition?

What is wrong if the State loses that revenue? My dream is to see a Tamil Nadu without a drop of liquor. Former Chief Ministers Rajaji, O.P. Ramasamy Reddiar, Kamaraj, Bhaktavatsalam and Annadurai implemented prohibition. Annadurai, when asked about how we will get revenue then, retorted, “If there is butter in the hands of a leprosy patient, will we take it?” It was Karunanidhi who removed prohibition. I have fought for 40 years against liquor. In Tamil Nadu, even 12-year-olds have started drinking liquor. DMK and AIADMK businessmen are selling over-priced liquor. This is also a kind of corruption.

Considering that you have been such a strong critic of the Dravidian parties, what are your thoughts on their future?

In the name of Dravidian ideology, our rights have been compromised or given up to other southern States. In my opinion, they have never respected our rights. No political philosophy or party will perish.

Political philosophies will sustain at all times, only their influence may differ from time to time.