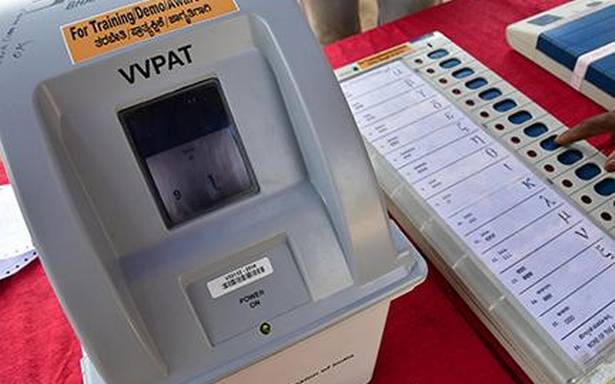 Tamil Nadu Chief Electoral Officer Satyabrata Sahoo on Friday said the voter verifiable paper audit trail (VVPAT) carried by a Greater Chennai Corporation staffer on his bike on April 6 from a polling booth in Velachery was used for 50 minutes and had registered 15 votes.

The transportation of the electronic voting machine, the control unit and the VVPAT was in violation of norms and a report had been sent to the Election Commission, which will take a final decision on re-polling, he said.

Two EVMs, one control unit and one VVPAT were carried on the bike, of which the VVPAT alone was used during the polling, Mr. Sahoo told mediapersons.

The VVPAT machine had developed a glitch, he said. Nonetheless, due to violation of norms (in carrying it) a report had been sent to the Election Commission.

The incident took place soon after polling was over on April 6, and it evoked strong reactions from DMK and Congress workers.

Based on the preliminary findings of the District Election Officer, the two EVMs were not used for polling, and strict action would be taken for any violation of norms, Mr. Sahoo said.

In Velachery, the Congress had fielded J.M.H. Hassan Moulana, as part of the DMK-led Secular Progressive Alliance.

The AIADMK had fielded M.K. Ashok.